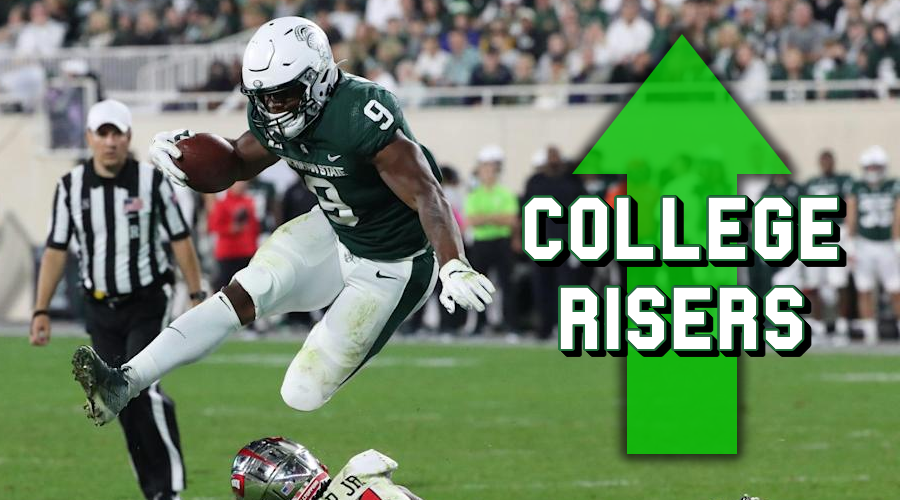 Since this page and my Youtube channel have been very NFL-centric and it’s still where my main focus lies, I wanted to take a look at the college football landscape and talk about some players that have stood out to me so far this year and how I project their ascent to affect their status for the 2022 NFL Draft. Therefore, I decided to only include players, who will be eligible for it next April.

At this point, there is no way I can watch every single college game of course and it’s not as easy to grab the All-22’s anyway, but I do however spend 13-14 hours every Saturday watching multiple games and take at least one other day per week to study players individually. So there may be more complete lists and I’m not able to offer as many deep sleepers as I can during actual draft season, but these are the guys that have moved up my early rankings and/or put their names on the watch list.

END_OF_DOCUMENT_TOKEN_TO_BE_REPLACED

The two teams meeting in this year’s national title game took very different paths to get here. The SEC (together with the ACC) was one of only two conferences to basically start the season “on time” and Alabama played ten regular season games, to go along with beating Florida in a shootout in the SEC title game and a convincing 31-14 win over Notre Dame in the CFP semifinal of the Rose Bowl. Ohio State on the other hand had three of their eight regular games canceled due to COVID concerns and it took the Big Ten to change their rules about the minimum amount of games played to qualify for a spot in the conference championship game, which they struggled with Northwestern through three-and-a-half quarters, but then surprisingly lit Clemson up 49-28 in the Sugar Bowl, to make it to the big game.

All those different factors that have led to the Crimson Tide and Buckeyes meeting in the CFP final don’t matter now, because while people may want to put an asterisk to this very unique season, in the end one of these teams can call themselves national champions. So now let’s see how these two teams match up and what I believe will happen. I will have one paragraph each for one team’s offense, the defense they are facing and how some of the matchups may favor either side, then I give you one X-factor for each team and finally get to my score prediction.

END_OF_DOCUMENT_TOKEN_TO_BE_REPLACED

Just like I mentioned last week with the offensive edition, I put out my rankings of the top five at every position as collegiate players, rather than solely draft prospects. The criteria remains the same – must have played at three games this season, no season-long opt-outs or players that were knocked by injuries for the rest of the year early on. So this list doesn’t include names like Gregory Rosseau, Micah Parsons or Caleb Farley, which could all end up being top ten draft picks.

Make sure to check out my rankings of the top offensive players and my in-depth breakdown of every game of NFL week 13!

END_OF_DOCUMENT_TOKEN_TO_BE_REPLACED

I usually put out my positional rankings at the start of every college football season, but under these unique circumstances, where I personally believed we wouldn’t even see these kids plays, I decided to focus more on the NFL. However, now that all conferences are back in action, we’ve seen all teams play at least a few games and we’re in December, I want to give you my top five players at every single position. As always, in this edition I’m evaluating them as college players, not solely draft prospects. There is enough time in spring to evaluate how their skill-sets will translate to the next level. To make the cut in these rankings, you must have played at least three games this season. So top-five type prospects like Penei Sewell and JaMarr Chase won’t make this list, since they opted out for 2020.

In this edition we’ll look at the offense and next week we’ll shift over to defense!

END_OF_DOCUMENT_TOKEN_TO_BE_REPLACED

All prospects have been evaluated, the rankings have been put out and we are just three days away from the draft. Now it’s time to have some fun!

I have been gathering information in the background and thinking about how Thursday could look like, but this is my one and only mock draft for 2020. To make myself clear – this is what I think will happen, not what I would do.

For every pick, I give a quick analysis on why I think it will happen and how I would grade them, in comparison to my big board.

END_OF_DOCUMENT_TOKEN_TO_BE_REPLACED Now that all the film has been watched and I have broken down over 350 draft prospects, it is time to reveal my top 100 players heading into the draft. You can check out my in-depth analyses and positional rankings right here and on Youtube for the explanation to why I have them where I do.

Number one has been the same the entire draft process, but after watching hundreds of hours of tape, a lot has changed further down the list. The top 20 is as good as it has been in any draft recently, but at some positions there could be multiple day-one starters available on day three.

If there are any players you can’t find here or among my positional breakdowns, you can simply ask me about my opinion on them in the comments or by sending me a text on one of my social media channels linked above.

END_OF_DOCUMENT_TOKEN_TO_BE_REPLACED 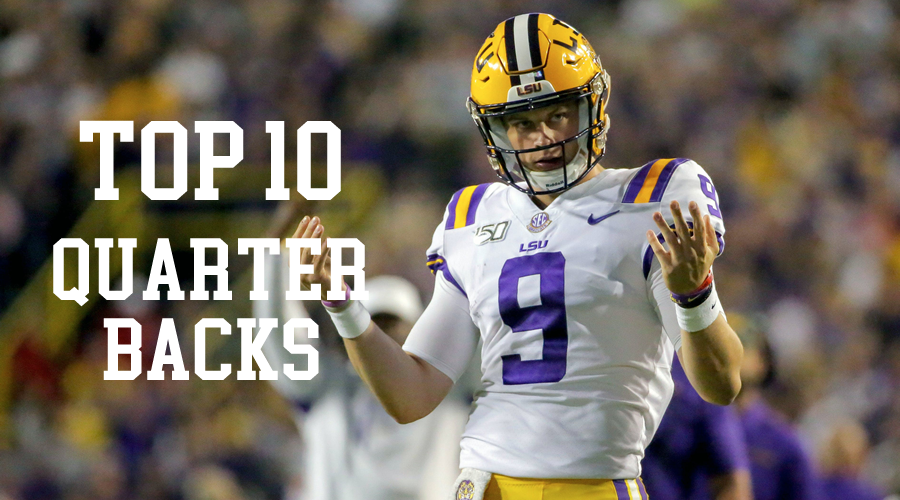 We have reached the final version of my positional draft rankings with the long-awaited and much-discussed quarterback class. Check out all my other breakdowns and come back for my top 100 big board later on this week, before I release my one and only mock draft for 2020!

I think a lot of people look at this group completely wrong. I don’t see a top four, but rather two top ten prospects and then a second tier of two QBs that I don’t even have first-round grades on. Then after that there are only four more guys I would even consider on day two, with very little after it. However, there are a few guys I think have a skill-set to be considered developmental prospects and a couple of players I haven’t heard anybody talk about.

You can also check out my video breakdown on Youtube.

END_OF_DOCUMENT_TOKEN_TO_BE_REPLACED 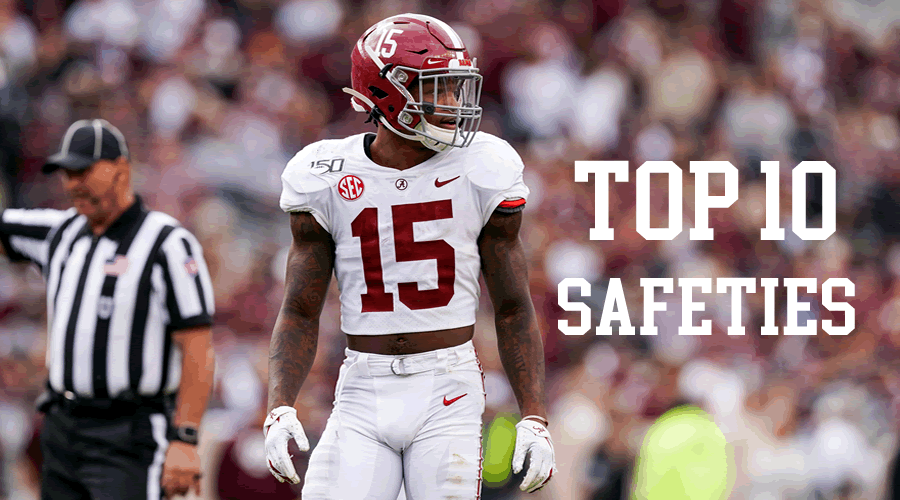 On the final version of my positional rankings for the defensive side of the ball, we are taking a look at the safety class. I already put out my top tight-ends earlier this week and now it’s just the quarterback that are missing – so check out those other articles and my video breakdown is already on Youtube.

Watching this group of safeties was very interesting. I think there is a pretty clear top three, but everyone of them has some obvious question marks. After that there is a lot of disagreement about who is next and I feel like I differentiate myself more so than at any position maybe. You can find a lot of notable mentions at the end, because I really wanted to be thorough and found a bunch of prospects worth considering.

END_OF_DOCUMENT_TOKEN_TO_BE_REPLACED 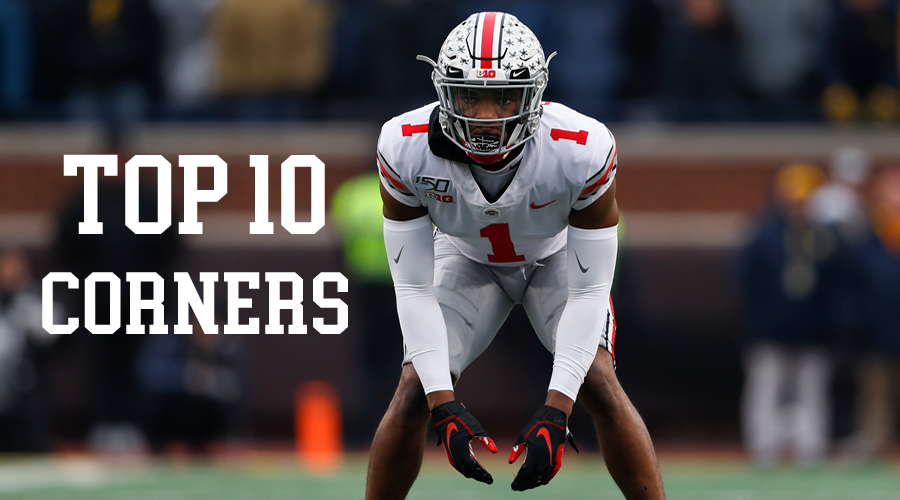 After talking about the loaded wide receiver class earlier this week, we now take a look at the guys who will be covering them at the next level. In this category of cornerbacks, I have included both outside and slot corners, while mentioning which type of schemes or roles they could fit best.

This class of cover-guys features one elite prospect, who will most likely be a top six pick, and I think the next three names have kind of separated themselves a little from the rest. Still, there should be several starters from day two and even after that I see a bunch of undersized prospects, who may be overlooked but could easily start at nickel their rookie season.

By the way, you can also find some of my breakdowns on Youtube now!