Every year NFL Network puts out a list of the Top 100 Players for the upcoming season, as voted by their peers. I have talked about the flaws of that whole process a few times already – the players only write down their top 20 players, which is understandable, but also doesn’t result in the proper results, since everybody is somewhat to put their guys on; not all players actually get to watch a lot of games, if they don’t include teams they actually face or are limited to watching highlights; and the voting concludes before the playoff are even here, which can be the only somewhat logical reason, Patrick Mahomes was only number four on the official list – even though that would still be wrong.

For the purpose of this list, I first put together my rankings of the top players at every single position, but then somewhat went off script by just writing down names in the order that they shot into my head, before comparing it with the positional rankings and trying to weigh guys against each other. And just to make this clear – these rankings are based on players regardless of their position, since otherwise would have almost half the starting quarterbacks in the league within the top 20 or so. And of course this is a bit of a projection and not solely built on what these players did this previous season, but also not about where they will be at the end of 2020.

END_OF_DOCUMENT_TOKEN_TO_BE_REPLACED

After talking about the top offensive players at each position a couple of days ago, we now switch to the defensive side of the ball. So we are looking at the best edge rushers (meaning 4-3 defensive ends and 3-4 outside linebackers primarily), interior defensive linemen (everything from nose tackle to 5-technique), off-ball linebackers, cornerbacks and safeties. Some of these guys are hybrid players, so I judged them according to where they line up primarily and what their best spot is. Once again, my criteria for which I judge them is their tape from their collegiate career so far, including the potential I see for them heading into this season, and I evaluate them as college players instead of NFL prospects, where they might fall a little lower because they don’t have pro measurements or athleticism necessarily.

END_OF_DOCUMENT_TOKEN_TO_BE_REPLACED

After talking about the most intriguing questions heading into the 2019 college football season, which is right in front of us, I now want to present my five best players at each position. This list is mostly based on where I would rank them right now, but also partially me projecting where they will stack up mid-season. So with some of these established players I really rank them as of right now, but with others I have to consider the talent and what I think they will develop into this year. To do so, I watched plenty of tape on all the top performers from last season (and who stood out to me in limited action) and tried to break them down as individual players. So I did not want to take their team or supporting cast into context and simply judge them based on their ability. Therefore you might not see some of the more common names or guys with the best statistics where you would find them on most lists out there. And to avoid confusion, this is a ranking of them as college players – not simply draft prospects. Today we start things off with the offensive side of the ball.

END_OF_DOCUMENT_TOKEN_TO_BE_REPLACED 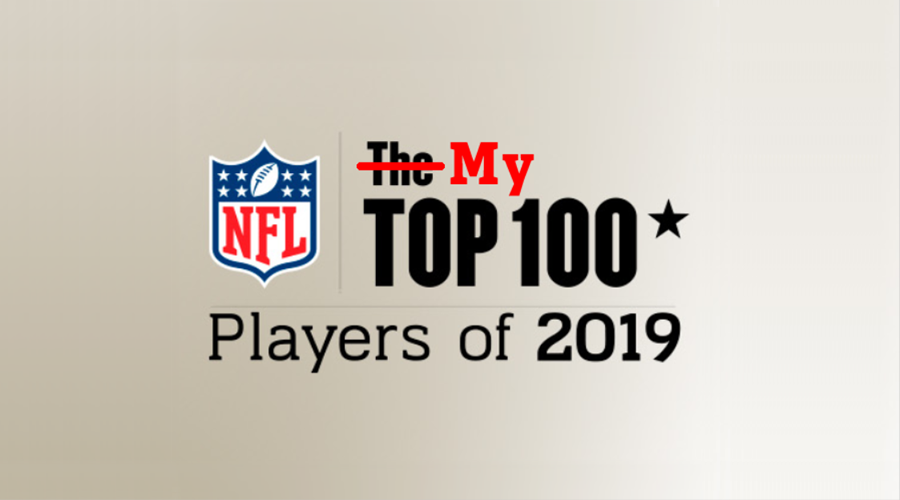 So usually I wait for the NFL Network to finish their countdown and then I can look at some of the comparisons, but for some reason they won’t start releasing episodes until two-and-a-half weeks from now. Since training camps are in full swing at that point and I want to look at position battles or maybe even look forward to specific games and such as, I decided to reveal my list now already – which is where I usually do anyway.

Like I do every year, I want to clear up the criteria first. This is a list for the top players in 2019 – therefore players who will miss several games due to suspension (Patrick Peterson for example) or injury (Sheldon Rankins to a lesser degree) won’t be included and I also put together a couple of names that I am just not sure yet about what their status for the upcoming year is. Please understand that I am looking at these players as individual talents and will not reward them fully for what they have around them in terms of teammates or coaches.

END_OF_DOCUMENT_TOKEN_TO_BE_REPLACED 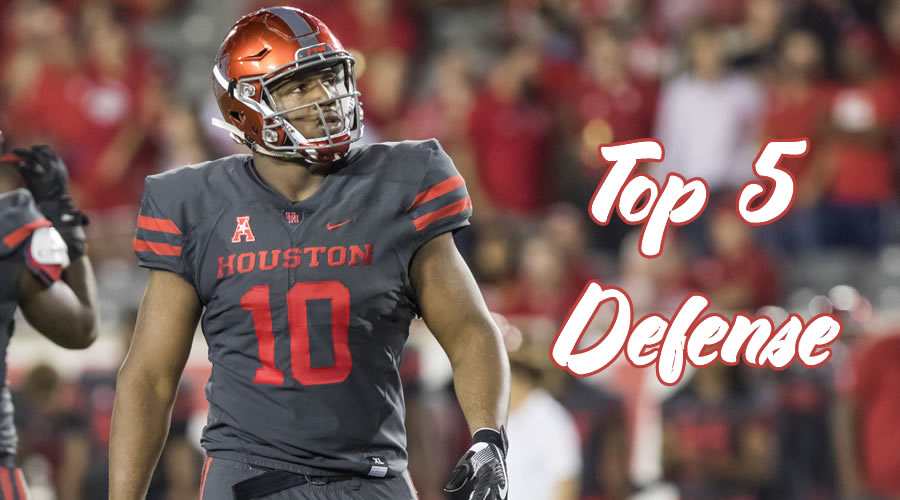 Finishing up on my top five positional rankings for this upcoming NCAA football season, we switch over to the defensive side of the ball. Once again, these lists are about where those guys stack up as college players – not as eventual draft prospects.  So the criteria I base them on is the tape I watched on them the last couple of seasons and the jump I project them to make this year. With that being said, I can’t help but look ahead to some degree, since I could easily see eight defensive players drafted in the top ten next April and most of them should be on the D-line.

END_OF_DOCUMENT_TOKEN_TO_BE_REPLACED

After revealing my most intriguing storylines heading into the 2018 college football season, I wanted to release my top five positional rankings, like I did a year ago as well. To make the criteria clear – this list is about the actual college players, as a combination of what they showed me last season and what I expect them to be in 2018. So this is not a look forward to these young men as draft prospects in 2019. Therefore, you might find some names that won’t be discussed a lot from next February to April. With that being said, I want to start with the offensive side of the ball and I will get back to defense next week.

END_OF_DOCUMENT_TOKEN_TO_BE_REPLACED

The position fans have the hardest time comparing players to each other and ranking them accordingly is cornerback. When people reach outside linebacker nominees in the Pro Bowl voting they look who has the most sacks and with defensive backs the number of interceptions is often the deciding factor. It’s just not that easy. To grade cornerbacks you have to watch the tape and understand their responsibility in the respective schemes. On film you can see if their coverage was that good the opposing quarterback didn’t want to throw their way, what position they were in prior to the pass, how they competed when the ball was in the air and which plays they were responsible for giving up. After watching multiple games of the best corners in the league, I decided to rank the top ten at the position up to this point of the season. This is an evaluation over a span of ten weeks, not who I think are the best in general. So some guys who have proven over time they are worthy of a spot didn’t make the cut, because they haven’t played at the level they are capable of. Here’s my list:

END_OF_DOCUMENT_TOKEN_TO_BE_REPLACED

There have been some amazing rookie performances so far this season and it’s time to revisit the draft. Some of those young guys have exceeded expectations, while others have yet to play up to their potential or simply haven’t seen the field much as of now. You can never really tell how good your investment will be after just a couple of weeks, but I wanted to list my top 20 rookies at this point. Here they are:

END_OF_DOCUMENT_TOKEN_TO_BE_REPLACED 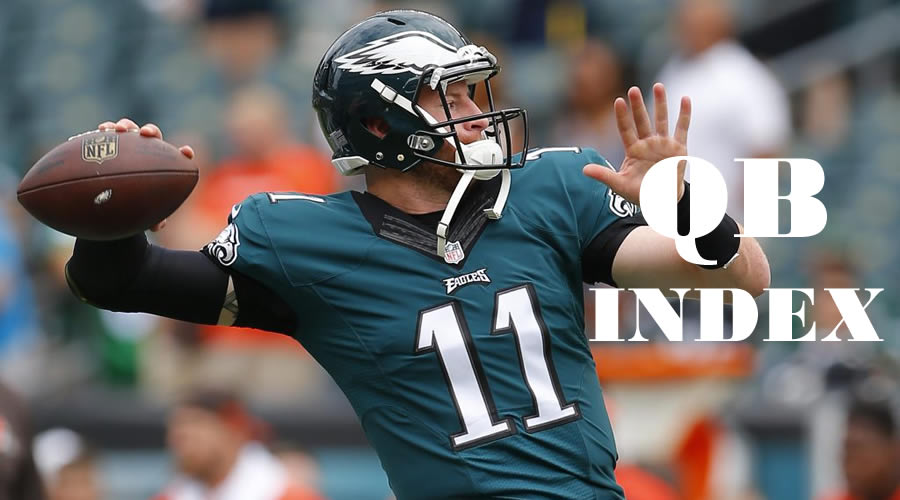 With the landscape of quarterbacks in the NFL pretty unclear right now, I tried to do my best in ranking all 32 starters as of how I think of them right now, going into week six. I made up my own categories to list these guys among, but I didn’t define the difference between each of them. It’s more about which profile they fit and at which stage of their career I believe they are.