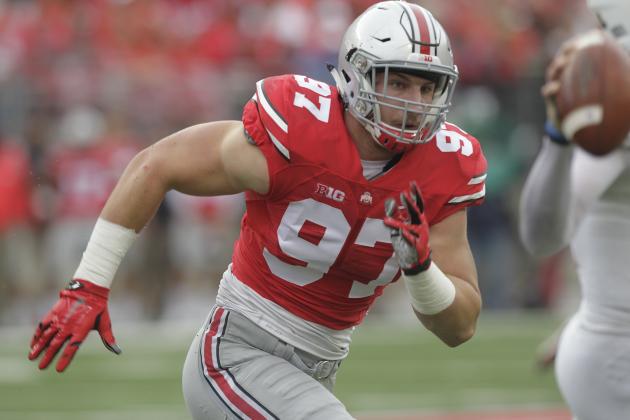 I started out with my top 10 runningbacks, linebackers, offensive tackles and interior offensive linemen in the 2016 NFL Draft. Now I’m taking a look at the best edge rushers in this year’s class. As we just saw in the Super Bowl and the games leading up to it, a team like the Bronos, with two elite outside pass rushers can make life really hard on opposing quarterbacks and have a lot of success that way. And while this year’s draft class might not be the deepest we’ve seen in recent time, there are some intruiging prospects out there. To make this clear – this list includes 4-3 defensive ends and 3-4 outside linebackers.

Update: Also check out the lists on interior defensive linemen and wide receivers.

Whoever picks Bosa up makes one of the safest picks in the draft. He guarantees hard work, discipline and a consistent motor. What I love about him is his technique – something not a lot of college kids have when they come into the league. He is great is swatting away blockers’ arms and running around them as well as taking advantage of them getting too tall and just putting them on skates and riding them into the quarterback. The Buckeye already looks like an NFL player with a strong upper body and a more explosive get-off than you’d expect. Although he might not be a very twitchy athlete or have elite straight-line speed, he knows how to take on blockers, but also how to make plays in the backfield (26 sacks and 51 tackles for loss in three years at Ohio State) and some defensive coordinator will have a lot of fun moving him around up front.

Lawson looks very strong and plays that way too. He overpowers blockers at the point of attack with quick, powerful hands and can drive them back into the ball-carrier. I like how he keeps contain and sheds blocks if the play is going his way, but I’d want him to show me more from the backside, not staying engaged and chasing runners down from behind. While he might not be a real natural bender and his effort sacks might go down a little in the pros, he is willing himself to make plays and his motor never stops.

The Ohio State transfer had kind of a mixed up pre-draft season. First he was basically unblockable in one-on-ones in Senior Bowl practices, then he ran a disappointing 4.8 in the 40 at the combine. He has outstanding upfield burst and can turn the corner like nobody else in the draft by staying low, keeping his balance and flattening to the passer, with room to improve his speed-to-power rush. I actually don’t really mind his 40-time. I thought he looked much better at taking on blockers in the run game and shedding them to take down ball-carriers, he has shown impressive lateral quickness and looked comfortable in coverage drills. There’s no question his drug problems and the banning from the Big Ten scare some teams, but he has worked hard to show he’s become a better player and person since that. 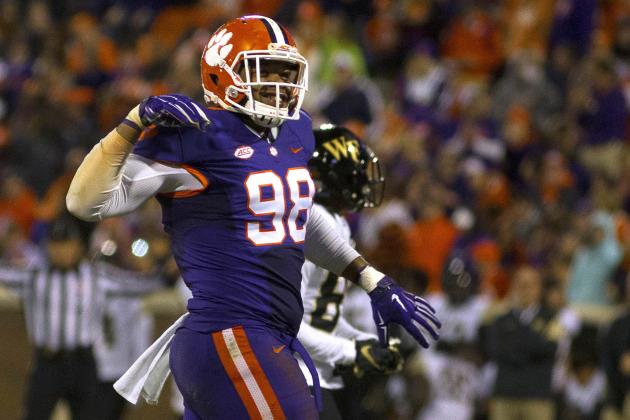 Some people have called this kid a one-year wonder, while I prefer to say he just needed some time to develop. He has the explosiveness, relentless attitude and overall athleticism to become a superstar at the next level. He certainly will have to work on his hand usage and upgrade his arsenal of pass rush moves, but he is well-coached and makes the opposition tired, because he doesn’t take off any plays. You can see how much better he got over the course of this season, saving his best for the National Championship Game, in which he recorded three sacks and two TFLs. He will need some more time to develop, but he has the physical abilities, motor and instincts to get it done.

To me Floyd is a passing down specialist. He is long and crazily athletic with the ability to get around offensive tackles because of his elite get-off speed, but he can also slither inside if his opponents overset to the outside. He’s great in space and can run with about anybody. I’m not sure how much more muscle he can add to his frame, so I just tried to evaluate his style of play at Georgia. That just shows me a guy who can be a nightmare for those 300+ pound NFL tackles as a pass rusher and run with slot receivers down the seams in man-coverage. However he lacks the strength to take on blockers of the size he’s going to face and seems to always try to catch ball-carriers from behind rather than in the backfield. 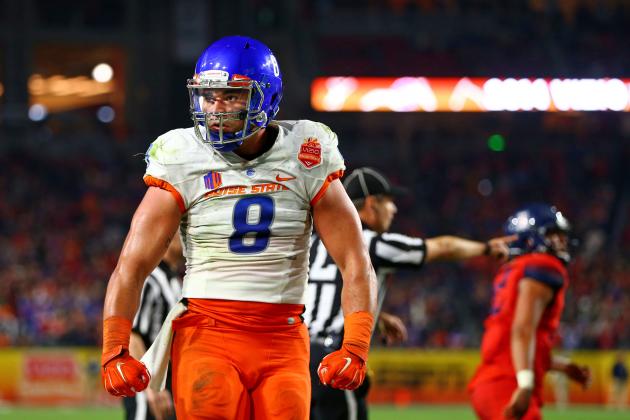 When you watch tape of this Honolulu native, you see the potential. He gets out of the tracks so fast, switching into another gear when he as a shot at the ball carrier and has shown different kind of pass rush moves, but he doesn’t convert that potential into big production for the level he played against. What I didn’t like to see was how he wasn’t able to accelerate around the corner the way he got out of his stance. I thought he handled the few coverage duties he got nicely and could develop in that regard at the next level and looked more stout against the run than he gets credit for, but he needs to learn how to set up his rush moves and play to his talent with the help of NFL coaches. He impressed scouts at his pro day.

After being named second-team All-American in 2013 and 2014 as well as being honored as the Big Ten Defensive Lineman of the Year, Calhoun decided to stay in East Lansing and show what a consistent player he is while making the All-American second-team once again. Calhoun can beat offensive tackles with pure speed because of how he gets off the ball and his long strides. While he will have to add more power to his game and become for aggressive in addition to keeping his pads lower, he holds his ground against the run much better than analysts say, can change directions quickly if 3-4 defenses want to use him some in coverage and had a total of 128 quarterback hurries and 26.5 sacks over his three year career at Michigan State.

That guy put himself on the map at the combine, where he ran 4.63 in the 40, had a 35,5 inch vertical and 121 inch broad jump, while also looking explosive in on-field drills. While he already has the looks of an NFL player, I don’t see him bringing those explosive traits onto the field yet. Ogbah wins at the point of attack in the run game and can’t be thrown off balance by punches, while on the other hand being able to shoot his hands up and control blockers. As a pass rusher he is still raw, leaning on speed and power rather than using good technique. He can stay on the field early on because of his ability to take on blockers in the run game, but he’ll have to refine his traits as a quarterback hunter and play with more effort.

This is one of my favorite players in the entire draft. A former walk-on, Schobert plays much bigger than his size would indicate. He shoots his hands quickly to get separation and see into the backfield, with the ability to slip blocks and either get down the ball-carrier or have him redirect and run into a teammate’s arms. He has outstanding instincts and football smarts to quickly recognize plays and blow them up. He misses some tackles and is very aggressive pursuing ball-carriers, put it pays off most of the time. People want to knock him for his size, but if you watch the Iowa tape you see he can completely take over games.

You don’t see a lot of outside linebackers under 6 feet in the NFL anymore, but Striker was an unbelievable playmaker for the Sooners, before being completely forgotten in the draft process. He does a terrific job anticipating the snap, can simply run by his blockers and uses his size to keep them from really getting their hands on him. When you watch his tape you see him lining up in the 5-technique, as a linebacker, over the slot – but the bottom line for him is he runs around like a mad man and gets to the football. At close to 230 pounds there’s no question he doesn’t have the frame to consistently take on NFL offensive linemen, but he has the play speed of a defensive back and isn’t afraid of anything.

Nassib is a relentless worker, whether that is on gameday, in practice or at the gym. As a former walk-on he was told he would never become a pro football player, but he led the nation in sacks in 2015 despite missing two games. He is often referred to as a one-year wonder, but you have to look at what he has become since arriving at Penn State.

Jenkins played on both sides of the line standing up as well as with his hand on the ground. He’s at his best when he attacks upfield and disrupts plays. He never put up more than five sacks in a season and teams don’t really look at him to play off the line of scrimmage because he doesn’t move quite well enough in the open field, but he can really set the edge and was a team captain.