Over the course of the last one-and-a-half weeks I listed my top 10 runningbacks, linebackers, offensive tackles and interior offensive lineman and edge rushers. I continue with the best interior defensive linemen, which includes nose tackles, base D-tackles who line up across from guards and three-techniques on the guard’s outside shoulder. This class is very deep and you can find quality starters probably all the way down to day three, while there also could be five to six of them ending up in the first rounds.

Update: Also check out the list on wide receivers.

I think this is a special player. He is tough, powerful and can play up and down the line. Buckner probably would have gone even earlier than his teammate Arik Armstead (No. 17 to the 49ers) had he entered last year’s draft. He decided to stay at Oregon for his senior year and he was the unquestioned leader of the defense. At 6’7’’ he uses his length and strong hands well to get separation from blockers, while also being able to stay low. He was a consistent disruptor for the Ducks, picking up 10.5 sacks, 17 TFLs and 83 tackles on his way to being named Pac-12 player of the year. He will have to work on how he uses his hands as a pass rusher, but he has fluid hips, a nice motor, long arms to knock down passes at the line of scrimmage and the old Reggie White hump move. His season was even more impressive when you consider how much attention he got with double- and triple-teams and he still has a lot of room to grow as he works on his technique.

He was this year’s Aaron Donald at the Senior Bowl. While Noah Spence was a terror off the edge, Rankins was basically unblockable in one-on-one pass rush drills. In the run game I see a guy who can both take on double-teams and find the ball against single blockers to shed and chase down runningbacks. As a pass rusher he has the quickness to get around opponents, but also the power to drive them back into the quarterback’s lap. Much like the Rams’ Donald people question Rankins’ NFL potential because of his size (6’1’’, 300 pounds), but he can penetrate, plays with outstanding effort, has really quick feet and great feel for the position.

I have yet to see anybody move Reed off his spot. He has huge, powerful legs, plays with great leverage and arm extension to control two gaps. Then he can either shed blocks and drive ball-carriers to the ground or hustle all the way to the sideline to force them out of bounds. Reed didn’t get a lot of attention during his time in Tuscaloosa, but he consistently frees up teammates and moves much better than you’d expect from a guy his size. I thought he looked terrific in change of direction skills at the combine, stood up All-American type offensive linemen at the Senior Bowl and that his best days as a pass rusher are still ahead of him. He has the frame and unbelievable strength to line up anywhere from the nose to the five-technique.

This is the guy who always looked like a man before everybody else. He combines an enormous frame and legs to throw blockers to the ground with smooth lateral agility to get himself into good position. At Alabama he was asked to keep two offensive linemen busy most of the time and still showed good vision to what happens in the backfield. He compensates his huge leverage problems with heavy hands and brute strength. Robinson certainly will have to play further to the ground and develop some go-to moves as a pass rusher, but he has the potential scouts look for.

This is the best run stuffer in the entire draft. His ability to keep his pads low and lock his arms out is remarkable. Billings uses violent hands in the passing game as well to slap opponent’s arms away and then can drive them back with bull rushes. He leans his heavy upper body into blockers’ arms and sometimes loses sight of what is happening on the play, as he needs time to react to ball-carriers changing directions and play-action fakes. At just 20 years old, with elite power, ridiculous chasing ability for his size and sure tackling he has enormous upside, although he is still learning the position.

Based on pure potential Nkemdiche could be the number one overall pick in the draft, but there are two things that keep him from that – he only dominates at times and raises character concerns, especially off the field. He has a beautiful body and elite overall athleticism with movement skills you rarely see out of D-linemen. He has the power to push the pocket and make plays on ball-carriers in the backfield. His issues off the field also reflects to what he does wrong when he plays – he leans into blockers to lose sight of his assignments and the football. You either get a player who doesn’t take coaching and doesn’t put the team first or a force on the D-line. Just watch the Alabama tape and how can see just how dominant he can be.

With a strong upper body and long arms he can stand offensive linemen up and hold his ground while having vision on the backfield and pursuing the play. Butler can be very elusive for a big man and torque his body to fit through tight gaps, although he gets too high at times. As a power rusher he puts guards on skates, but in general he sometimes completely disappears as a pass rusher when his first move doesn’t work. He will need to work on his rush moves and have a better plan, but his skill set is impressive as was his performance in Senior Bowl practices, where he gave O-linemen a very hard time and showed a swim move, I hadn’t seen from him until then.

This Bruin is one of the best run stuffers in the draft. He gets off with great burst, keeps his pads low and sticks his feet in the ground to win at the point of attack and control double-teams. Though he played defensive end, tackle and noseguard and could succeed in a 2-technique, I think he’s suited best across the center, to have a lot of value on first and second down, while also having violent hands and good push to collapse the pocket.

If you look for a prototype body for the position Jones has the size (6’6’’, 310 pounds), long arms (34.5 inch arms), body control and strength you are looking for. Unfortunately he’s not yet the player who brings it completely to the field. With his quick feet and hands he shows flashes of disruption, but lacks the ability to do it every down. He has passing downs where he wins quickly off the ball, but he doesn’t work enough with technique to get home. Jones brings a lot of versatility lining up everywhere at the line of scrimmage.

What I really like about Johnson are his ability to take advantage of his powerful lower body and balance to hold his ground and that he never quits on plays. As a pass rusher he has picked up nice sack numbers mainly due to his motor, but he will have to use better technique in the league. He has a nice bull rush and excellent skills of reading screens. But if he works hard on playing closer to the turf and develops better rush moves he could help a lot of teams especially by keeping his linebackers clean. 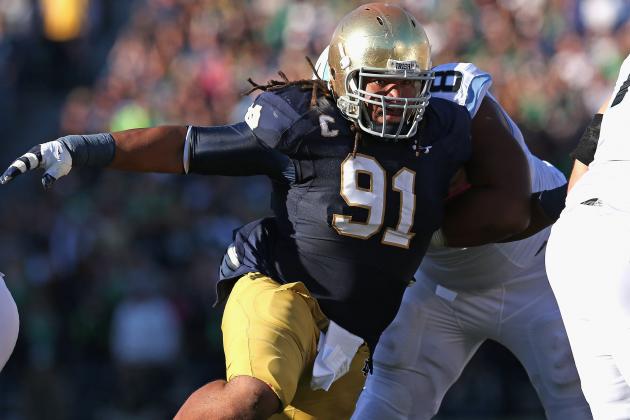 The biggest thing with Day are the mass of small injuries that he always has had, but when he hits the field healthy you see an explosive D-tackle who is very active and aggressive. He knows how to always use his hands and not get stuck with a blocker, as he never stops working. The two-year captain got a lot of praise from his teammates because of his football smarts and how he chases ball-carriers. He’s not the kind of guy you want taking on double-teams, but I like his potential as a penetrating 3-technique who can bring a lot of value as an interior pass rusher and has experience with blitz packages where he drops back into zones.