Adding to my top 10 linebackers and runningbacks in the draft I now give you my best offensive tackles and interior offensive linemen. With some of those guys I’m just projecting which kind of players they could become, even though there might be a couple of things they still have to work on.

He has phenomenal feet and balance. With those two things combined with outstanding technique and hand usage, he has proven to be able to mirror every pass rusher he’s had to face. His elite footwork and ability to climb to the second level and take linebackers out of the play make up for his lack of pure strength in the run game. He has the quickness to stay with pure speed rushers but can also anchor against power. 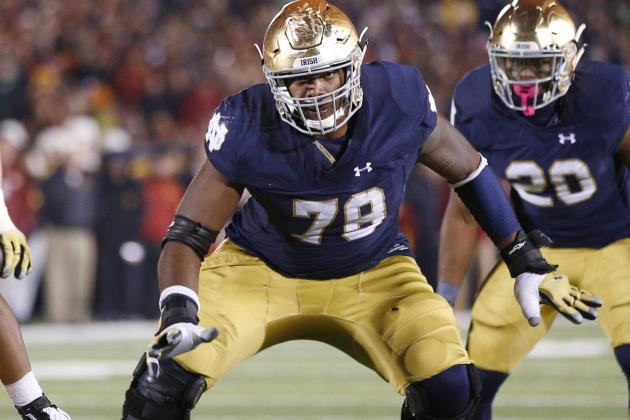 This kid is extremely long. Besides that he has great lateral quickness, athleticism and understanding of the game. He might not be a road-grader in the run game, but he is tough and drives defenders off the ball when he’s asked to. He understands how to block with angles and keep his teammates free. The two things he’ll have to work on to be a great NFL tackle are his core strength and pad level. 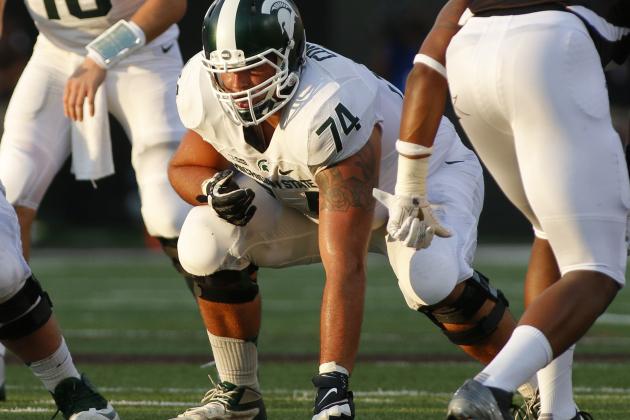 This former walk-on is a tough, physical mauler in the run game. He played right tackle at MSU and that’s where I think he will ultimately end up. He plays with a wide base and dominates with brute strength and his feisty nature. His toughness and trait to always initiate contact by shooting his hands inside gives the O-line a competitive attitude. He has limited quickness and sometimes struggles with speedy edge rushers, but he makes up for it with all the other qualities mentioned and great coaching. 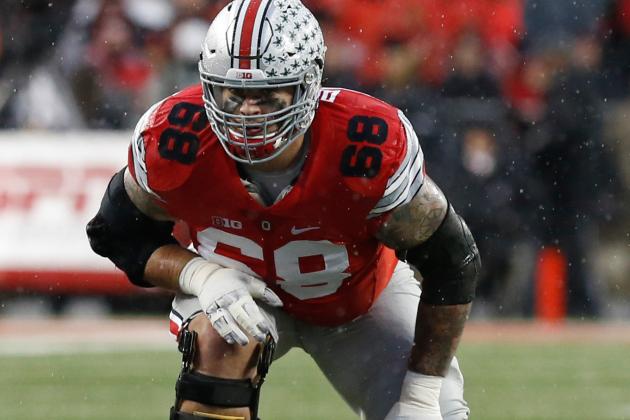 This is another tough, nasty and strong tackle from the Big Ten, much like Conklin. Decker is very sound and solid. He struggles at times with speed rushers, but plays physical and can push defenders away from the action. He plays too high and will have to learn the nuances of the position, but he has worked hard and improved a lot during his collegiate career and could start ten plus years on the right side. 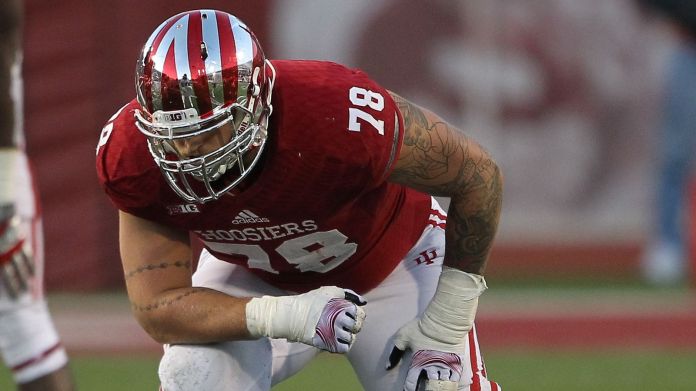 The Hoosiers starting left tackle over the last four years allowed only 7 sacks in 47 games. He has quick-twitch speed and agility combined with great hand-technique to mirror and seal the edge. He blew up the combine with the fastest 40 among offensive linemen, a 115 inch broad jump and fluid movement in on-field drills. No question – he has to play stronger and more controlled, but he has the room to put up some more weight and if he learns not to overset to the outside to prevent getting beat on counter moves, he can make himself a living on the blind side.

After being named All-American freshman at right guard, Clark was kicked out to left tackle, where he spent the rest of his collegiate career. He combines a quick set-up with elite foot quickness and patience in pass protection. And when he gets his hands on a rusher straight on it’s over. He’s not known for driving defenders off the ball and could still add some muscle to his frame, but could be a special player and will probably benefit from more of a pro-style offense.

After having to beat cancer before starting the last two years for the Tigers, I know one thing Coleman certainly is – a fighter. His combination of size, power and athleticism works great with his nasty demeanor on the field. Too often he lets his base go wide and tends to rather use his hands to hit than control, but he will play hard and work on his flaws when he gets time.

Perfect length and mass for an NFL offensive lineman (6’6’’ with 36’’ arms and 324 pounds). He plays with a wide base and doesn’t let defenders go through him. He reaches out with his long arms to control rushers, but often is late with them and doesn’t position them very well. The display of sloppy footwork and overall technique hurt him, but he has the tools to succeed, although many teams may think about moving him back inside to guard.

He’s a very natural and smooth tackle with the quickness and lateral agility you look for at the position. Hawkins has long arms and gets a good lick on defenders with his hands, but he’ll have to work on keeping them where they are and replacing them when he slips off. He can anchor against power rushers, although he will have to improve his overall strength. 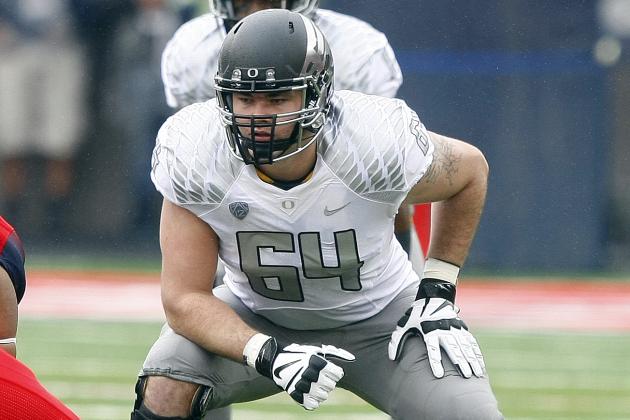 Like Hawkins I put this guy up here because of outstanding athleticism and natural abilities. The two big concerns with him are his upper body strength and a very long and bad medical report, but I like his toughness (especially after having to fight through all the injuries), the fact he plays through the whistle and just those god-given things he has. If he can reach his 2013 form I think he’ll be a huge steal, who fits best in a zone-scheme, like he ran at Oregon. And let me tell you – he looked awesome in the shuffle drills at the combine.

Much like Barrett Jones, he started for the Crimson Tide for three years, won the Rimington award for best center in the nation and finished his collegiate career with a national title. Although Kelly might not be the most impressive athlete, he has elite understanding of the game, communication skills and consistency. Adding to that is the fact he hasn’t allowed a single sack over the past two seasons. Both the coaches at Alabama and from their opponents had high praise for him and he is the kind of player who I think you can pluck in right away and get the whole offensive line working.

After playing excellent at left tackle for the Wildcats, Whitehair projects best at guards in the league, but has the versatility to start at all five positions. He plays strong, smart and with a lot of toughness. In pass protection he uses a wide base and rarely gets out of position, but rather driving rushers away from the quarterback if needed. The habits he’ll have to eliminate are getting to tall when defenders get into his body and grabbing their jerseys too often.

After just six games of his freshman year Garnett was inserted in the starting lineup and the rest is history. He was the one of the best guards week in and week out and received the Outland Trophy for the best interior offensive lineman in the country his senior year. Garnett is built like a block wall and when he gets that big body moving in the run game defenders start getting intimated. He didn’t have big problems in protection at Stanford because of his power and long arms, but he’ll have to work on his footwork and quickness to hold off NFL defensive tackles, as he tends to get overextended sometimes.

His brother Zack was the first player in NFL history to be named All-Pro in year one – so the genes are there.  The thing that keeps him from also being drafted in the first round is the knee injury he suffered in 2013. I think he has the intelligence and football smarts to start at center though. He might not be very long, but he plays with great technique, quick hands and through the echo of the whistle. I really liked what I saw out of him at the Senior Bowl and if he gets back to 100% he could anchor an O-line for years.

A demon in the weight room, Westermann impresses most with outstanding quickness, whether that is with his initial punch and lateral movement skills in protection, the ability to get in front of defenders and seal off blocks or just how he gets out of his stance. He’s at his best when he is on the move and puts his hands on defenders. At just 6’3’’ he might have some problems with long defensive linemen, but he is technically sound and loves to compete.

For four years Allen was a model of consistency in the middle of the Spartans O-line. His limitations come from his length at only 6’1’’ and average athleticism, but other than that his game doesn’t have many flaws. He plays with a lot of grit and toughness, has extremely quick hands and is always under control because of his core strength and the fact he plays to his strength. While the refs in the NFL might call some of his holding tighter, coaches will love him and he will be a leader for a long time.

At LSU he had playing time at tackle, but I think he’ll be a guard in the league. He has the size and strength to dominate the line of scrimmage and is a people mover in the ground game. You might want to label him as a phone booth guy, because he’s not at his best in space, but he can completely take linebackers out of the play when he gets to the second level and gets great grip on defenders. He’ll have to really work on hand and body positioning, but he has the natural abilities to turn into a great player.

This guy is huge. With the power he has in his lower body he is a road-grader in the run game and punishes D-linemen. He can completely take them out of the play and doesn’t stop moving until the whistle blows and then some. In protection he profits from his natural strength to neutralize pass rushers, but he’ll have problems with the quickness of interior defenders in the NFL. He’ll have to learn to be more aggressive in pass sets and still looks planless when asked to reach linebackers.

This is another freak in the weight room and he brings that strength onto the field, as he consistently drives defenders off the ball in the run game and eliminates pass rushers by not giving them anywhere to go. While he might not be the quickest or fastest player, he did a great job at both tackle spots, shows surprisingly quick feet in short areas and knows what to do at the second level. And if scouts didn’t already know, he showed his versatility at the Missouri pro day working out at tackle, guard and center. 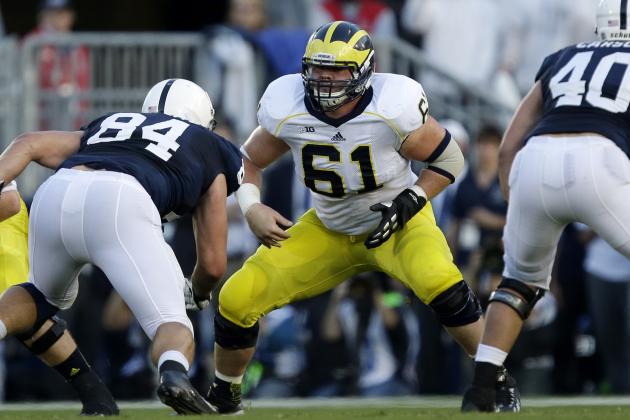 At 6‘6‘‘ Glasgow might be a little too tall to play center in the league, which could force him to move to guard. It doesn’t really matter where teams play him, he has great understanding of the game, plays very physical and always keeps a strong base. He had some issues violating Michigan’s drug policy, but he has worked extremely hard at the East-West shrine, then received an invitation to the Senior Bowl and showed he belonged there. To me he seems like he really wants to become a pro.

Tuerk is kind of wild card among those interior linemen. He could have been in the top five, but he couldn’t show anything at his pro day that tells me he’ll come back from him torn ACL, so I can’t put him up there yet.  But he is smart, tough and really athletic.

Boehm is a completely different story. While he isn’t anything close to the athlete Tuerk is, he is very powerful guy, who doesn’t let go off blocks once he gets his hands on a defender. He plays very instinctive and showed a lot of leadership at Mizzou.