This week I want to give some love to the big guys. We always talk about the skill players and try to rank, so I thought I’d rank the best O-lines in the NFL right now.

Similar to two years ago I’d split the MVP award into five and give it to the Cowboys O-line. They are one yard away from leading the league in rushing yards per game, one score away from leading in the rushing touchdown department and they have picked up an NFL-best 97 first downs on the ground. In pass protection they’re equally as great allowing just 11 sacks (exactly half of what teams around the league average). The crazy thing is they drafted three of those five guys in the first round and they have all received multiple All-Pro recognitions while La’el Collins should have been a first rounder as well. Without trying to take anything away from what the dynamic rookie-duo of Dak Prescott and Ezekiel Elliott have been able to do, nowhere would those two guys have had the kind of success they had than behind this Great Wall of Dallas 2.0. No doubt those are special talents, but the front line has opened up some huge holes for Zeke to burst through and punish defenders in the secondary, while providing a clean pocket for Dak to be able to stand in there calm and find the open man. Last Sunday against the number one rush defense in the league they had problems getting the ground game going early, but as the game went along they wore the Ravens defensive front down like they have done late in games all year long.

Nobody really talked about this Titans bunch in the offseason, but here they are – only one game behind the Houston Texans in the race for the AFC South. Sophomore QB Marcus Mariota has been spectacular and if it wasn’t for Ezekiel Elliott’s historic rookie campaign we’d be talking about DeMarco Murray as an MVP candidate, but to me the reason they have been in every game this season has been the offensive line. Behind this front Murray has rushed for 1000 yards and Mariota has put a quarterback rating of over a 100. Just like the Cowboys’ O-line this unit features three first rounders and while rookie right tackle Jack Conklin and maybe center Ben Jones are on their way to earning Pro Bowl nods, left tackle Taylor Lewan has played as well as anybody at his position not named Tyron Smith. I also really liked the signing of center Ben Jones, who learned from the great Chris Myers in Houston and has brought stability to the middle. I think this unit is at its best when they maul people off the line of scrimmage, but they have also given up just 14 sacks on the season. 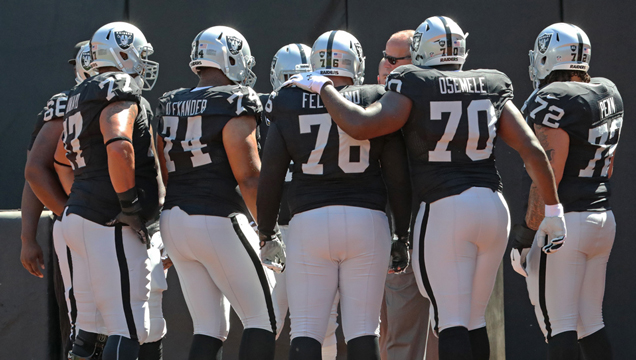 Different to the Cowboys and Titans offensive lines this front has been built up mainly through free agency with LT Donald Penn coming in three years ago, center Rodney Hudson joining last year and now guard Kelechi Osemele in his first season in the Bay Area. Rarely any fan on the street knows the big man known as K.O., but he has developed into one of the elite players at his position and deservedly got paid like it in the offseason. Penn has quietly been one of the top ten tackles in football over almost the last decade and Hudson is a savvy vet who holds this rather young unit together which is completed by the draftees guard Gabe Jackson and tackle Menelik Watson. You saw what they can do when they gashed Denver’s Super Bowl champion defense for 218 yards on the ground and shut down the Broncos vaunted pass rush. They have kept MVP candidate Derek Carr clean all year and they can move defenders off the line to be able to finish games by running the ball. To get Latavius Murray going they use a special form of zone plays where he receives the handoff on the opposite side of where the line blocks.

This capital-city offense has been very explosive since week six putting up 27.8 points per contest. Even though Matt Jones put up some big numbers in the first game of that stretch, I really feel like having Rob Kelly as their workhorse has brought a lot more consistency as he has yet to put the ball on the ground in 84 rush attempts while Jones already had three fumbles, with two of them ending up as turnovers. Now you can see – this Redskins offensive line can dominate the opposition. On Sunday Kelly just ran for 137 yards on the once number-one ranked Green Bay rush defense and that commitment to the ground game sets up deep shots to Jamison Crowder, DeSean Jackson and as we saw last week even Pierre Garcon. But even when they’ve been one-dimensional they have kept Kirk Cousins clean, which has been especially impressive the last two weeks against the Vikings and Packers when they’ve allowed just three sacks going to Danielle Hunter, Nick Perry and Julius Peppers who have combined for 18.5 sacks this season, because they were without one of the top three tackles in football in Trent Williams.

There are some talented young offensive linemen nobody knows yet down in the Big Easy. Having a Hall of Fame quarterback like Drew Brees behind them certainly doesn’t hurt, but you don’t lead the league in passing yards without great protection. We all know Drew hates taking sacks and he has only been taken down 16 times in 2016. When the Saints competed for championships in the early 2010s they had a balanced attack that was built around a strong O-line and the intelligence of their signal caller, but instead of investing quarterback-money in guards like they did back then they have filled those spots with young promising players, whose salary cap doesn’t hurt them very much. Left tackle Terron Armstead who they selected in the third round four years ago is already playing on a Pro Bowl level and last year’s first rounder Andrus Peat has played very well inside and outside. Then they have the best right tackle in football in Zach Strief, who has excelled for this franchise over the last decade and center Max Unger, who they acquired two years ago in a trade for Jimmy Graham has really brought this unit together. Right now they rank 17th in total rushing yards, but they are also middle of the pack in attempts and in the last four weeks, since they have put more focus on running the ball to take off some pressure off their defense, they have put up an average of just under 140 yards on the ground. I give a lot of credit to them for playing banged up and without key pieces on several occasions.

This team leads the league with about 158 rushing yards per game and 17 total rushing touchdowns, while averaging 5.3 yards a carry which is half a yard more than the next-closest candidate. The issue with them lays in pass protection – 26 sacks allowed. But they have been without franchise left tackle Cordy Glenn for a couple of games and the right tackle position with Jordan Mills has been rather disappointing. The reason they missed the cut is the injury to Eric Wood who will be out several weeks with a broken leg. Therefore they will have to rely even more heavily on the ground game with a guy like Richie Incognito who is like a missile trying to take out defenders. This Bills O-line is physical and when they get you napping they hit you with excellent counter plays.

They have one of the best center-guard combinations in the league in the Steel City with Maurkice Pouncey and David DeCastro. The converted army member Alejandro Villanueva has settled in nicely at left tackle and when those five guys up front play big this offense with Big Ben and Le’Veon Bell in the backfield and Antonio Brown on the perimeter can fire on cylinders. What held me back from putting them among the elite offensive lines is how they were dominated in Philadelphia and Baltimore when they scored only 17 combined points.

Matt Ryan, Julio Jones and those two young backs get all the attention in Atlanta, but I think their success offensively has been in large part due to this O-line finally coming together. The addition of Alex Mack in the middle of that unit has worked wonders and so has the development of Jake Matthews, which really started a year ago. The guy nobody ever talks about is left guard Andy Levitre, who has kind of been a jouneyman in the league, but excelled everywhere he’s been. Right guard Chris Chester has pretty much been the weak-link of those five men up front in terms of allowing pressure.

One thought on “Top five offensive lines in the NFL at this point:”