After going to the NFC Championship game three years in a row, the 49ers can get to .500 at best if they manage to win their final regular season game, which wouldn’t even bring them close to a playoff spot this year. Coming into the season as one of the favorites to end up in Arizona in February, their season went the wrong way and they’ll end the year with a lot of question marks not many people expected them to face at this poit.

So why did their season go the wrong way? 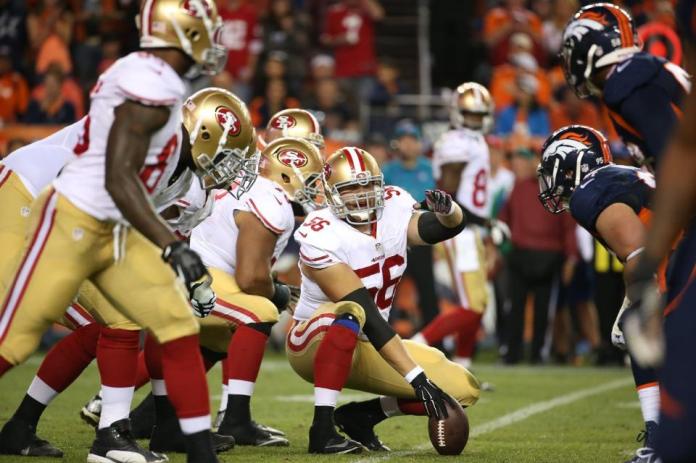 Struggles on the offensive line:

The Niners’ success in recent years has been in large part due to the strong play of their five guys up front, but not so much this year. They began the season with starting right tackle Anthony Davis on the sideline, who couldn’t manage to stay healthy over the course of 2014. Backup Jonathan Martin struggled mightily during his absence. In the offseason the 49ers let center Jonathan Goodwin go and went with Daniel Kilgore over the first half of the season, before Marcus Martin took over in week eight. That led to inconsistencies at the position and while a lot of fans underestimate the importance of the center position, he is the main signal caller next to the quarterback. Guard Alex Boone sat out training camp because of contract discussions and their standouts left tackle Joe Staley and left guard Mike Iupati didn’t perform at the level they used to either.

With all those factors coming together the Niners allowed a total of 51 sacks in 15 games, which ranks as third-most only behind Jacksonville and Washington, whose years were over by midseason. I think the key to success in all of football is strong play up front and an offensive line should always be the tightest group on the team. Those guys just never really came together for them.

In his first one-and-a-half years as the starting quarterback, Kap went 17-6 in the regular season with one Super Bowl appearance and another NFC Championship appearance. He has often been called modern days’ best dual-threat signal caller with a lot of experts (and me) thinking he would take the next step this year. Rather than that he has regressed from where he was last year. Most of all he simply hasn’t shown good pocket awareness, which is related to their aforementioned struggles up front and Colin’s disbelief in the protection. He has been eager to get of the pocket and make plays with his feet instead of trusting the guys around him more and keeping his eyes downfield. Certainly connected to that is the fact he hasn’t shown the ability to go through his progression. Way too often he has stared down his number one guy or just took off running. I’d also like him to see him work on his footwork and overall accuracy in combination with developing more touch on his throws instead of always trying the fire the ball into his receivers.

This probably is the most obvious one. Other than Arizona, I don’t think there’s another team in the league that has had to deal with that many losses of key players as San Francisco has had to. They lost All-Pro middle linebacker NaVorro Bowman in the Championship game to a severe knee injury and Glenn Dorsey to a biceps injury in the offseason for the entire year, their best pass rusher Aldon Smith had to sit out their first ten games because of suspension and they took big hits during the year with nose tackle Ian Williams (week 9) and their emotional leader Patrick Willis (week 6) missing the rest of the season due to injuries. A couple of rookies (ILB Chris Borland, OLB Aaron Lynch) and other players (Michael Wilhoite, Dan Skuta) stepped up big time and remarkably the Niners defense was still one of the very best, but by having to rotate guys on the offensive line and at wide receiver as well they just couldn’t find enough consistency to win ball games.

I’ve always been a big fan of offensive coordinator Greg Roman and he has been huge for San Francisco’s recent success, but I had to question his play selection the entire year. The 49ers threw the ball way too often on first downs and short yardage plays instead of handing it to Frank Gore and Carlos Hyde. In addition to that they have put the ball in Kaepernick’s hands in the biggest moments, when they were down and when they were in the red zone instead of trusting their running game. With an offensive line struggling in pass protection and lacking confidence you can’t trust your quarterback all the time, when he is struggling himself. I would have also liked for the Niners to give Colin more easy throws, getting him on the move and just dumping it off for example, rather than having him in the shotgun and reading the defense every time. 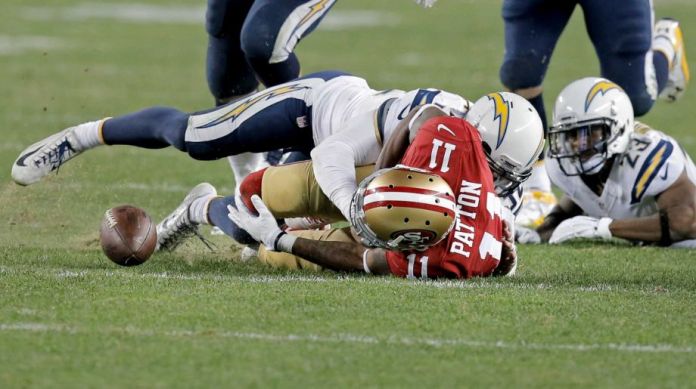 This season, on average, opponents have scored about twice as many points in the second half as the Niners have (11.4 against 5.5). This is a recipe for chaos.

As I just said, San Francisco’s play-calling has been questionable the entire year and that’s true for the rushing attack in the second half as well, as they got away from running the ball way too often. The number of turnovers and penalties produced have played a big role as well. At the end of the year you could also see they didn’t have the same fight and will to win games as we are used to. Saturday night’s loss to the Chargers proved my argument, as the 49ers blew a 21-point lead kind of giving the game away (not to say Philip Rivers didn’t play his butt off).

As I said at the beginning of this article, the 49ers organization will have to face a couple of question marks going into this offseason, the biggest one being the future of head coach Jim Harbaugh. With a lot of speculations around him going to Oakland or Michigan you can’t tell who will be in that position at this point.

San Francisco still has one of the best and deepest rosters in the league and I don’t think they have to bring in a lot of new players for them to be successful. To me these are the keys for them getting back on track this upcoming year:

Get the offensive line together and bring in more stability

With some of their best players coming back from injuries and a full offseason to work together, I expect the 49ers to be a Super Bowl contender once again next year.