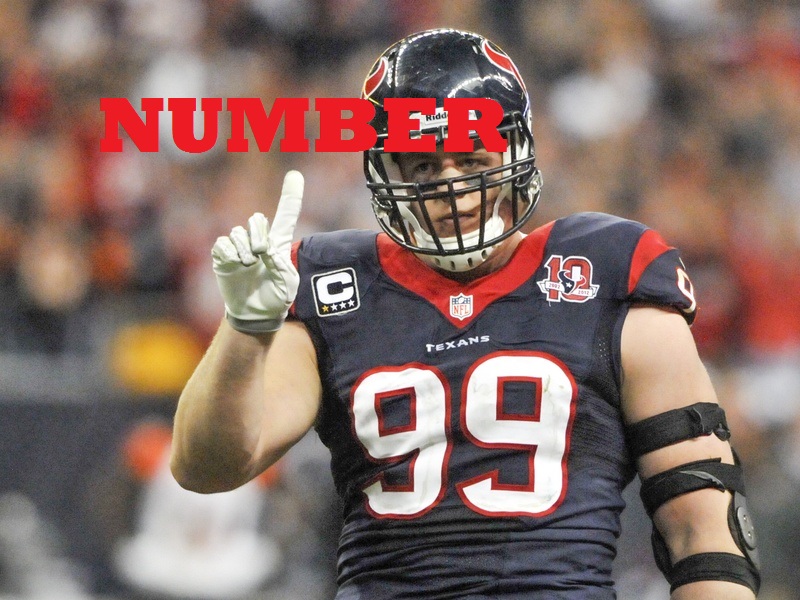 Watt was the Defensive Player of the Year a couple of years ago, has led the Houston Texans to their first two playoff appearances in franchise history and has put up unbelievable stats over the first four years of his career.

Now I want to explain to you why he should win the award for Defensive Player of the Year this season.

J.J. is a pretty unconventional run defender, as he tends to use quickness instead of power to shut runners down. He’s not afraid of using a perfectly timed swim move to get around the offensive lineman and chase down the running backs. That’s why – as crazy as it sounds – you should prefer to run at him, because if you run away from him he will get that ball carrier on the ground. The bad thing about it is that you can’t often move this monster from the line of scrimmage. But I still think you just can’t leave him one-on-one on the backside of run plays.

On this play the Redskins decide to run at him, but Watt just reaches out and sheds the block to take down Alfred Morris.

He is the best interior pass rusher I’ve ever witnessed. He just can beat you in so many ways. As mentioned before he has a great swim move, he can counter his moves very well, he can simply take offensive linemen, extend his long arms and push them into the quarterback’s face and he has unbelievable speed and quickness for a guy his size. He finds the weaknesses of the guys lining up across from him and embarrasses them. Teams try to put two guys on him, but he still finds ways to make plays or at least free up some of his teammates.

Against the Browns J.J. fires off the ball, gets the right tackle’s hands off of him and speeds around the corner to strip Brian Hoyer.

Mr. Watt has proven himself as an air traffic controller for Houston’s defense. I don’t think there has ever been anyone as good at getting his hands up in the passing lanes as he has. By doing so he has shown other players rushing the passer that they can make plays outside of sacking the quarterback. It may not look that spectacular but getting his hands on the football has the same effect as a defender in coverage deflecting passes and it gives teammates the chance of coming down with the ball themselves. The only problem I have with that is the fact that he sometimes is looking too much at the quarterback to know where the ball will be thrown, but he’s great at anticipating one- and three-step-drops and breaking up passes.

Right here J.J. anticipates the quick drop perfectly and jumps up to knock the ball down even before Andrew fires it.

This is a characteristic that is often overlooked by average fans, but to me this shows if the guy if a true football player and J.J. Watt clearly is one. There’s never a play he stops working to get to the guy with the football in his hands. You constantly see him catching guys from behind and simply trying to make a play. He jumps on piles and tries to rip the ball out all the time. He just never stops.

Andrew Luck is one of the most mobile quarterbacks in the league. It’s crazy that Watt can catch him from behind on this rollout.

You can line him up anywhere on the line and he will make plays for you. You can put him at the nose but also outside of tackles and tight ends to set the edge. This gives the Texans the chance to do a lot of different things – they can line him up at defensive tackle and bring in extra edge rushers, they can overload the opposite side of him and create one-on-one opportunities for other guys and do a lot of stunts with him to keep the offensive line off balance. In addition to that he’s great at spying the quarterback, although he’s even better at rushing. He just demands so much attention and makes life easier for his teammates and their defensive coordinator Romeo Crennel when it comes to different schemes.

No matter which game it is, no matter what the score is he always gives 110% and his teammates feed off of him. His hustle, playmaking and sheer will to do whatever it takes to win is something that makes the guys around him respect him and try to do the same. He is the man to stand up in front of the team and gets them fired up, but he doesn’t have to say a word to get his guys going.

Many times when the question appears why Michael Jordan was the greatest of all time, the answer is that he had ‘it’. And while you can’t really explain what that means, I think J.J. Watt has the same in terms of football. He can change the game on any given play. He strips quarterbacks, picks up fumbles for touchdowns or picks off passes and takes them back to the house. And he contributes partly on offense as well, as he has caught three touchdown passes this season, but not to entertain fans. As head coach Bill O’Brien said himself, he is in there because it is best for the team. He simply is that kind of a player and he comes up with big plays in the biggest moments.

Like when the Texans were down 10-7 in the third quarter against the Bills in week four when Watt picked off E.J. Manuel and took it back 80 yards.

Taking all of those things into account, you simply have to look at him as the top defender in the league right now. He has all the skills and traits necessary to dominate and beyond. He is a crazy athlete, very smart player and a guy you want to build your franchise around. To see him get the kind of production he has is absurd when you consider what position he plays at and that teams gameplan so much for him – he gets double-teamed, chipped and simply schemed around.

For everyone who loves stats – in 62 career regular season games Watt has racked up 53 sacks and 54 ½ tackles for loss, has forced and recovered 11 fumbles, has batted down 37 passes, has blocked four field goals and he has scored five total touchdowns this year alone.

These numbers are remarkable and become even more impressive when you think of how much attention he gets. But J.J. and his game is not about the numbers, he impacts every single play.

What makes him so great and sets him so far apart from everybody –as told by all coaches and teammates – is his unbelievable work ethic.

I know this is a quarterback-driven league and I love what Aaron Rodgers is doing and how he is leading his Packers to victories, plus you just can impact the game in a different way as a signal caller, but I don’t think there’s a more dominant player in football than J.J. Watt and he has to be one of the leading candidates for league MVP.