It’s been one-and-a-half weeks since we wrapped up the 2018 NFL Draft and after talking about the top prospects and which teams selected them where, it’s time to look at the guys, who didn’t hear their names called in Dallas. I thought this year we had an enormous amount of talent still left out there among the undrafted players and I want to shed a light on who they are and how I think they could find a role with their respective teams early on.

Denver released veteran C.J. Anderson about three weeks ago, in favor of the younger Devontae Booker and now third-round pick Royce Freeman from Oregon. Looking at those two guys, they are both very physical runners, who have some experience as receivers out of the backfield (even though I believe Booker is more talented). However, the Broncos don’t really have a true passing down back. That’s where my guy Phillip Lindsay from the Buffs comes in. At 5’7’’, 185 pounds, the rookie doesn’t have NFL measurements, but he is so tough and wears his heart on his sleeve. In his last two seasons at Colorado, Lindsay amassed 3500 yards and 32 touchdowns from scrimmage, including 56 catches in 2016. I think he could develop into a Danny Woodhead-type player for them, as a weapon out of the backfield, who runs with a wiggle and isn’t afraid of standing in there in pass protection. 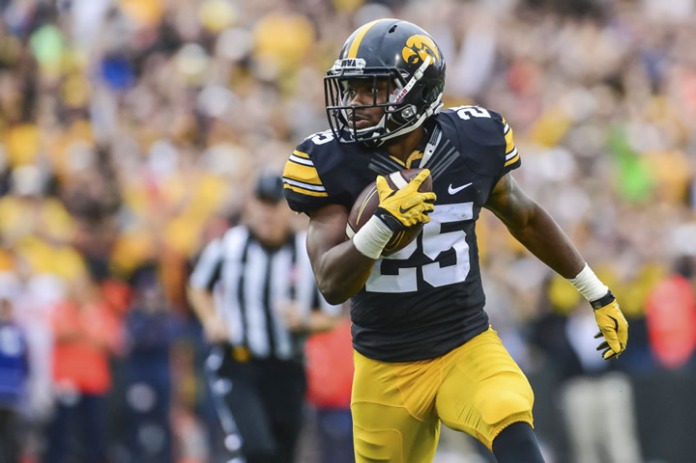 Tennessee’s backfield has seen major changes this offseason. They let go of DeMarco Murray to feature Derrick Henry and they brought in another 1000-yard back in Dion Lewis. Even with those two guys on the roster, I think Wadley will find his way onto the field and make an impact. The dynamic Hawkeye back slithers through defenses and can bounce off people, with the way he runs. He might only be 195 pounds, but he runs hard and he can squeeze through tight spaces. In the open field, he is a master at leaving defenders in one-on-one situation behind in the sand and if Tennessee can spread defenses out, he has space to work with in the open field. I think it’s a disgrace that Wadley didn’t hear his name called at all during draft weekend, since I had him as my number ten overall RB. Whenever I put on Iowa on Saturdays I was in awe and watching him on tape, he was equally as impressive.

Iowa State had some magical moments in 2017, when they beat teams like Oklahoma and TCU, who were top four teams in the country at those points. When you paid attention, you could see how Lazard was bodying defenders when the ball was in the air. The 6’5’’ receiver possesses a huge frame and he knows how to take advantage of it. I don’t think he has the speed or quickness to create separation purely with his route-running, but he wins with size and physicality. The Jaguars gave up their top two receivers in Allen Robinson and Allen Hurns in free agency. While he might not be a huge contributor in-between the 20s, I’m confident, Lazard will be a weapon on the goal-line, especially with the other Allens off the roster.

With the emergence of the top duo of running backs, an underrated offense line, Michael Thomas being a beast on the outside, Ted Ginn Jr. to take the top off defenses and a future Hall of Famer in Drew Brees running the show on offense, this team is poised to put a lot of points on the board. The one element, they are still lacking is a tight-end, who can take advantage of the fact that linebackers have to step up against the run and stress defenses down the seams for them. I know the Saints brought back Ben Watson, who could definitely have a big role for them as well, but he’s not running away from anybody at this point of his career. Serigne did a lot of the things for Wake Forest that Jimmy Graham used to do in New Orleans, in terms of being split out wide and playing above the rim. It’s been a minute since Drew Brees had a dynamic target at the tight-end position and I believe Serigne could be that guy for him.

The Seahawks are in a rebuild or retool process. No matter how you want to call it, they don’t have the same roster, they competed for championships with, anymore. Yet, I expect them to run a similar defense once again under Ken Norton Jr. and it’s up to finding players, who fit their scheme. Missouri’s Marcell Frazier can pin his ears back and rush the passer for Seattle. He won’t see the field early on in base sets, but he will hunt quarterbacks, especially with Cliff Avril being cut a few days ago. Frazier doesn’t have the burst off the line like Avril, but he has a well-rounded pass rush arsenal and plays with an excellent motor. I had him as a mid-day three prospect and I could see him get quite a bit of action on passing downs.

When I talked about the Browns’ draft a week ago, I thought they could have done a better job at maximizing their opportunities with the capital they had amassed and that I thought they selected some players earlier than I think they should have been picked. However, I like a couple of the priority free agents they have acquired since. The one that jumps out to me the most is this big Bulldog defensive linemen. Thompson was the Maxwell National Defensive Player of the Year his senior campaign in high school, when he recorded a ridiculous 36 tackles for loss and 17 sacks. He has sudden hands, tremendous power and displays great hustle. His snap anticipation can get a little inconsistent and he has yet to prove that he can stay healthy, but he flashes on tape and I had a fifth-round grade on him coming out. He could find his way into interior D-line rotation rather quickly.

Let’s look at the Rams’ offseason. They added feisty cornerbacks in Marcus Peters and Aqib Talib, Ndamokung Suh to go along with Aaron Donald on the interior of their defensive line and a steal in the draft in Oklahoma’s Ogbonnia Okoronwko, who will rush off the edge for them. However, Los Angeles also traded Alec Ogletree to the Giants and now need someone to cover backs and tight-ends from the linebacker position in Wade Phillips’ man-heavy defensive scheme. I think Scales can not only fulfill those duties, but with the front they have constructed, they can also keep the former Hoosier backer clean to run and chase players around on the field. He was one of my favorite players to watch on tape, because of his tenacious pursuit and how he can take on a variety of roles on passing downs. 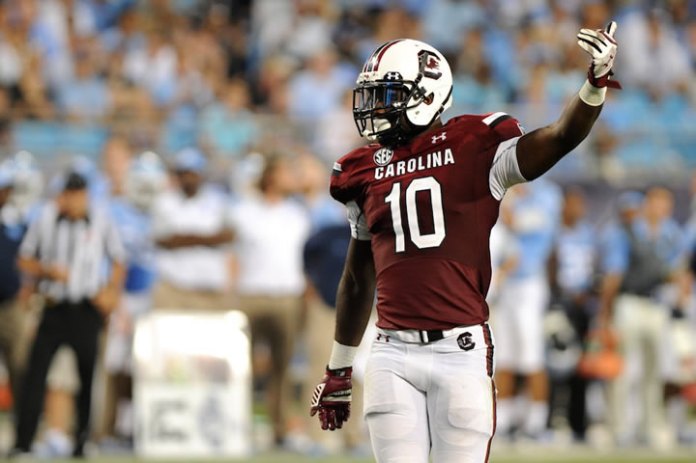 Indy came into this offseason looking for some serious help on the linebacker level. They already had some pieces rushing off the edge and on the back-end, but the second level needed a boost in talent. Therefore, they selected South Carolina State’s Darius Leonard in third round, who I think will start at SAM for them week one, but I believe they found themselves a gem among the undrafted free agents, coming from the same state. Moore was a four-year starter for the Gamecocks, who made a living in the rigid SEC, despite weighing in at just around 220 pounds. His biggest impact however, came in the passing game. Moore brings safety-like coverage skills to the linebacker position and he came up with a total of 14 interception during his collegiate career, with many of them coming at the most crucial points. I definitely see him play a role in sub-packages, but to be honest, I think he should be competing for the starting WILL spot.

The G-Men are in a precarious situation. With the selection of Penn State running back Saquon Barkley, in favor of the top quarterbacks in the draft, they have clearly taken a win-now approach, but they still have some holes to fill to compete for another Super Bowl. They had some imbalance in their locker room and had to let go of some of their veterans like Dominque Rodgers-Cromartie and others. DRC was a major contributor for them in the slot and even though they could potentially lock guys down on the perimeter, the nickel spot is still up for grabs. Haley doesn’t have very good size, but he is extremely competitive and has excellent short-area quickness. I could definitely see him be in the running for the starting inside spot, with how fearless he plays and his secure tackling skills.

I’m really upset with this NFL draft process. I know this is all about athletic talent and upside, but there is absolutely no way Blanding should have gone undrafted. The former Virginia safety doesn’t have elite top-end speed, but he possesses great football instincts and intelligence. In his four years as a team leader for the Cavaliers, Blanding collected almost 500 tackles, nine sacks, ten interceptions and 16 additional pass-deflections. The Redskins have some interesting options at safety to go with D.J. Swearinger, but I have no doubt the coaches will love this guy, who eats and breathes football. Blanding has the size, smarts and toughness to play in this league and I hope he gets a chance to do so early on. I had him rated ahead of guys like Terrell Edmunds, who was a first-rounder, Armani Watts and others.