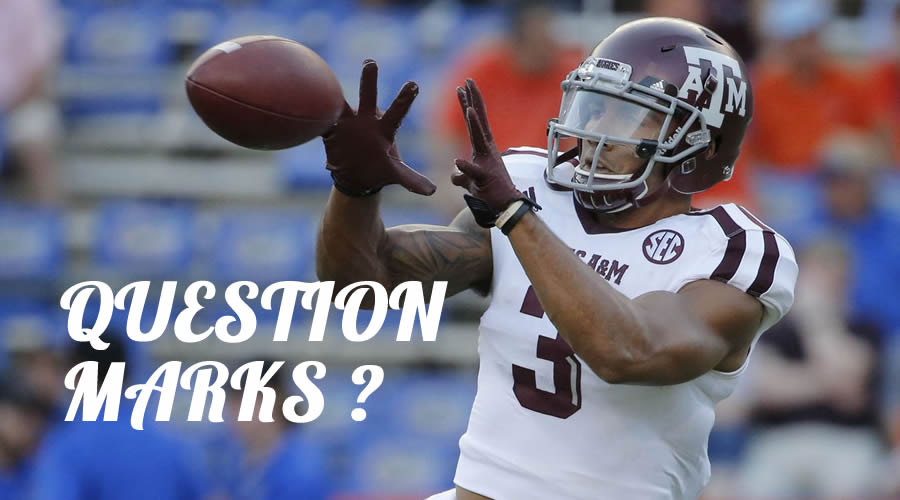 Every year, there’s some NFL prospects with major question marks going into the pre-draft season. While a large portion of the film work already done, they have a chance to impress scouts at the combine and their respective pro days, forcing those guys to go back to the tape and re-evaluate what they’ve seen from these young men. Of course, you can’t analyze quarterbacks going through their progressions or safeties reading route-patterns in shorts, but there are some details to keep your eyes on. I picked out ten (or rather eleven) players, who are looking to hear their names called early on in late April and will have to prove some of their doubters wrong, to fulfill that dream. 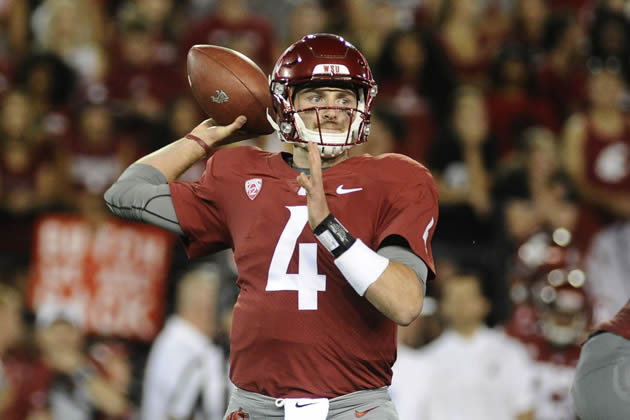 Falk was highly productive as a four-year starter in Wazzu’s pass-happy offense. He throws with a ton of touch and accuracy, leading to high completion percentages throughout his collegiate career. We already know about his limited mobility, which could be problem at the next level, but I need to see some arm strength at the pre-draft events. He didn’t really shine at the Senior Bowl, but if it’s about raw physical tools and technique, he should still have time to convince people around the league. The former Cougars’ signal-caller was highly accurate on underneath and intermediate throws, but he didn’t show the same qualities as a vertical passer. I want to see him push the ball down the field and retain that precision to make me believe he can stress NFL defenses, instead of allowing them to sit on underneath and intermediate routes. This might be difference in him becoming an eventual starter down the road or a quality backup for most of his career.

Johnson really caught stride last season and carried the Tigers to a SEC Championship berth. He scored 20 touchdowns in 2017 and made a serious run at the Heisman trophy before banging up his shoulder late in the year. Kerryon said in an interview during his last campaign, that he models his game after the Steelers’ running back Le’Veon Bell. While Johnson’s start-and-stop running style is reminiscent of the All-Pro RB, what sets Bell apart from a lot of other guys in the league, is his work in the passing game. In three years at Auburn, Johnson combined for just 574 yards through the air and a lot of them came on screen plays or simple dump-offs. I’d like to see him run routes at the combine and his pro day to see if he can be an asset as a pass-catcher going forward. Fortunately for him, Bell didn’t reach 200 yards receiving as a junior either, before entering the draft, and was a 240-pound power pack at Michigan State.

Both of these receivers seem to be fighting the ball to some degree. While Kirk is more of a body-catcher, who lets the ball gets into his chest a lot and tries to cradle it, Sutton is still a work in progress in terms of using the diamond technique, in favor of clapping his hands at the ball. Those guys got a way with that for the most part at the collegiate level, but with the confusing NFL catch rules and elite defensive backs ripping or punching at the ball, when it touches the hands of the receivers, the college guys likely will struggle going forward, if they don’t clean those things up. I want to see them catch the ball with their finger-tips and even though some scouts don’t like it, I’m interested to watching Kirk go through the gauntlet drill, which demands quick, clean catches and doesn’t allow any room for error, to double-catch. The Aggies’ and Mustangs’ receivers are the number two and three guys on a lot of people’s draft boards and understanding how natural their hands are respectively will go a long way in figuring out if they belong there. 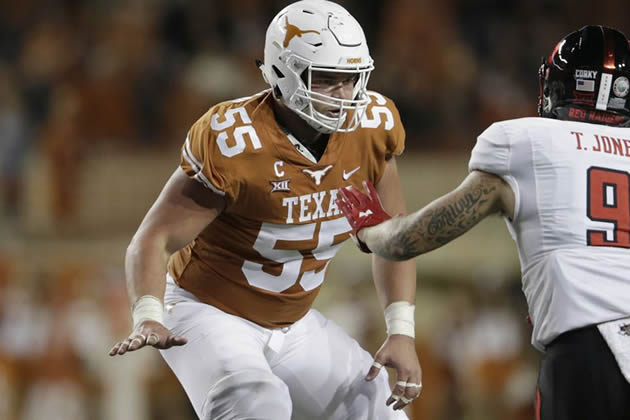 Based off his 2016 tape, I thought Williams would be a top five pick in this upcoming draft. Unfortunately, the Texas tackle started his junior year off slow before spraining his knee and suffering a meniscus tear early on against USC. Some teams believe he wasn’t right before getting hurt and don’t really count his following two starts. They will want to sit down with him and evaluate if he’s fully back to his 2016 version. Moreover, while being 6’6’’, his arms look rather short for an NFL tackle. Since we don’t have any official measurements yet, it will be intriguing to see how long he actually is and if he will be able to counter those lanky edge rushers. He might very well be the most talented prospect in this tackle class, but it has some pretty good talent at the top. With a discouraging showing at the combine, he might very well end up as the third guy selected at his position. 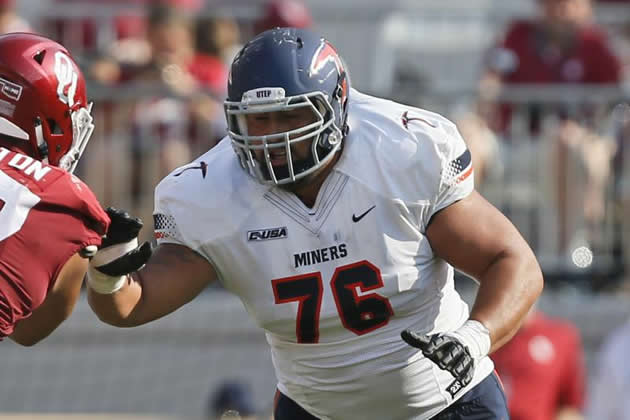 This is a big man at just under 350 pounds and a rather stocky 6’2’’ frame. Obviously, Hernandez can move people in the run game and impose with his size, but the NFL is a pass-first league and he will be asked to protect against some of the 3-tech defensive tackles like Aaron Donald and Geno Atkins. Those are remarkably quick men for their size and as a guard you need to be able to move your feet accordingly to stay in front of them. The second-team All-American looked great in one-on-ones down in Mobile at the Senior Bowl, when I thought he was more of a phonebooth guy. Yet, his hands continued to go outside the frame, like they did at the collegiate level, and he won’t get away with that at the next level. I want to see him in mirror drills and other movement displays to confirm what I saw a couple of weeks ago and slot him in as a top-five prospect for the interior offensive line.

Coming into his senior year, I had Lotulelei rated as one of my top defensive tackles in college football, as he reminded me a lot of his older brother Star, who was a first-round pick by the Panthers five years ago. I thought he showed a ton of power as a pocket-pusher and the ability to hold his ground in the run game, based off his 2016 tape. What impressed me the most, was how active he was, looking to keep working and chasing down ball-carriers. Therefore, I was shocked by what I saw from him in his final campaign with the Utes. He looked slow, overweight and simply not engaged. There’s some speculation that he played hurt, but even more so scouts question his passion for the game. The average fan won’t be able to sit down with him in a room and talk about his injury history and love for football, but we will all see what kind of shape he is in. If he looks sloppy and doesn’t show up as a different guy, he will drop heavily in the draft. 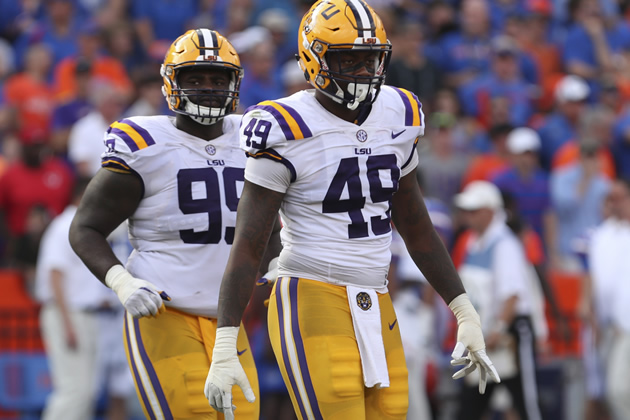 While Key needs to add to his frame if anything, the big question with him is kind of similar to Lotulelei – how bad do you want this? I thought the LSU star was the elite edge rusher in college football before the start of last season. His get-off and speed around the corner were unmatched and he just came off a 12-sack campaign. Ahead of the 2017 season, he took four months of absence due to personal reasons and had shoulder surgery, forcing him to miss the first two games of the season. When he came back, he didn’t look nearly as dangerous and went quiet for large stretches of games. A finger injury cost him another three contests and his numbers dropped dramatically. He recorded just four QB-takedowns and produced a very small number of impact plays in general. Key has all the length, quickness and flexibility you want to see from pass-rushing specialist, but his attitude is a major question mark. I felt like he was a top-ten pick a year ago, but from what I’m hearing and reading he might fall out of the first round.

Kiser was the most productive linebacker in all of college football over his last three years with the Cavaliers. He amassed close to 400 total tackles and was the heart and soul of the Virginia defense. While his run-stuffing prowess and ability to lay wood on people is unquestioned, he comes in with some serious mobility concerns. I’ve seen him struggle with being able to pursue ball-carriers bouncing to the outside, but even more so when asked to change directions in coverage and stay with quicker pass-catchers. I don’t think any scouts will question his football IQ and he has enough passion for the game to make the two guys, I mentioned just now, elite players, but if he has problems opening up his hips and operating in space he will have a tough time making a living in coverage among the pros. Diagonal drops, W-drills and other activities will tell a lot about if he is suited for the NFL game. 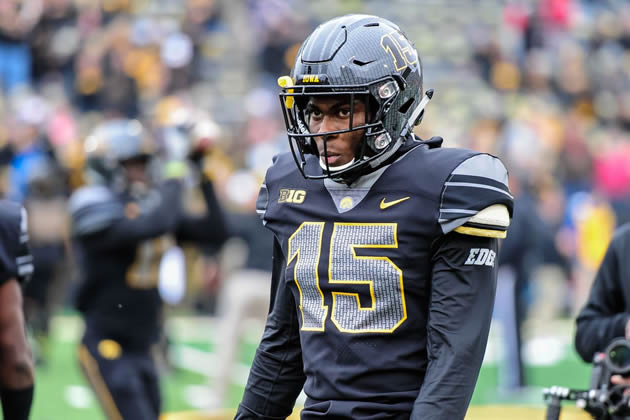 This guy was just a one-year starter, but he balled out in his lone season as a full-time contributor for the Hawkeyes. Jackson led the country with eight interceptions and took two of them back to the house. We know that he is a ball-hawk and can break on routes with the best of them. What some scouts aren’t sure about quite yet is his ability to run downfield and be left on an island. During my tape work I’ve seen him press a lot when he had help over the top, but when playing off in cover-three, he gave receivers a ton of room and occasionally got burnt on double-moves, while sinking deep. Jackson has a very good chance of being the number one corner off the board in April, but in order for him to gain or solidify that status, he will need to run well in Indianapolis, to shut some of the doubters up. 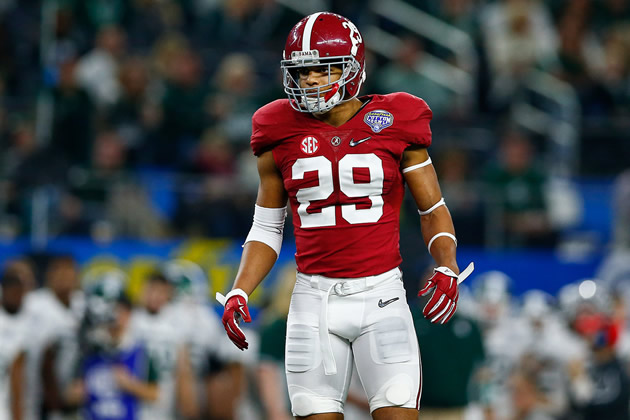 The Tide’s all-world defensive back was a swiss army knife during his three-year career. Fitzpatrick started as a corner during his freshman campaign, but he was moved back to free safety during the middle of last season, when Eddie Jackson went out with an injury. As a junior, he took on multiple roles. He played safety on base defense and either dropped down into the slot or as a dime linebacker on passing downs. While his versatility might be his biggest strengths, there’s some uncertainty about what his true position will be at the next level. He didn’t show a lot of sink in his hips when playing off-coverage and appeared a little stiff on some occasions, coming out of his breaks. Scouts want to see him be able to open up more and change directions in space. I think scouts already know the answer on if he can be a star on the inside, but they want to know if he will be able to turn and run, allowing his to survive on the outside as well. I’ve been following this guy throughout his time at Alabama and judging from his freshman tape, I think his hips are plenty good.