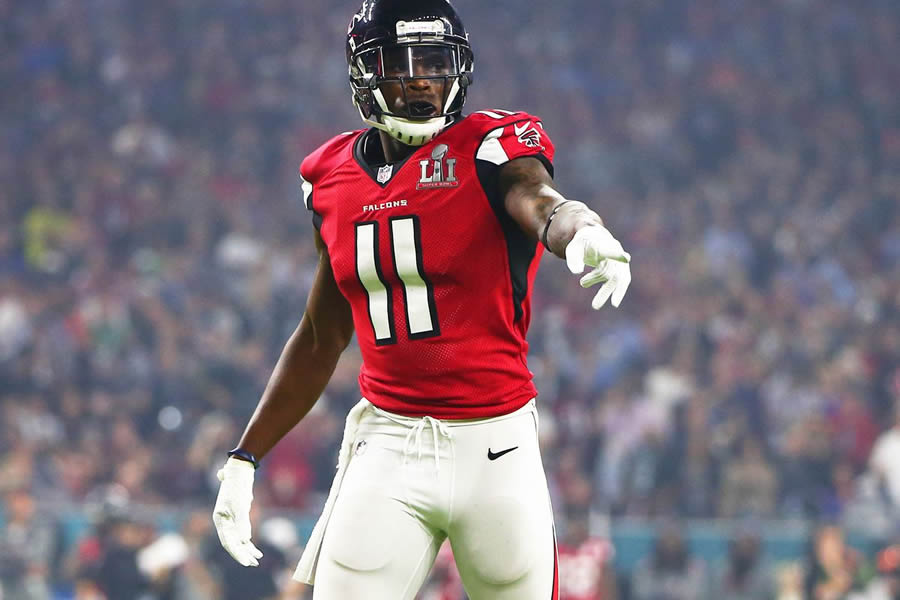 After talking about why I think Marshal Yanda is the best guard in the today’s league, I want to take a look at the biggest weapon of the number one scoring offense of last season and analyze him. Ever since entering the league as the sixth overall pick in the 2011 NFL Draft, Jones has worked his way into consideration as one of the best receivers in the NFL and right now I would put him above anybody else. Here’s why:

According to the Falcons roster Julio is only 6’3’’, but when you look at him on the field he looks as big as Megatron did. He is generally regarded as a tall target with a lot of range. But even though he understands how to use his size to his advantage, he can also sink his hips to get in and out of breaks like smaller receivers. He uses his hands very well from the snap until he carries the ball and has an innate feel for how to get open by defeating the leverage of defenders. At the top of his routes he gains separation to his opposing defender better than anybody I have ever seen at his size. Overall he has become a complete receiver, who can run the entire route-tree after starting his career as more of a deep threat.

Like I already said, Jones is a big target. Yet what makes him rise over defenders constantly is the way he can elevate and bring in catches at the highest point. When he came out of Alabama in 2011, the All-Pro receiver impressed scouts at the combine with his speed and leaping ability, but he did so with a fractured foot and still put up 38 ½ inches on the vertical jump as well as leaping 11’3’’ on the broad jump. Right after the combine, he underwent surgery on his foot and never got to do the drills at full strength. I’m sure if he did get a chance to improve on those numbers he would have crushed it, since you see him basically every Sunday jumping over guys and taking the ball away from them.

The Falcons ended the Panthers perfect 14-0 start to last season thanks in large part to Jones’ humungous catch-and-run over Luke Kuechly.

You can learn most qualities of a receiver like how to run routes, read coverages and so forth, but the one thing that can’t be coached or taught are ball skills. Not only do you have to manage to put yourself into position to make the catch and adjust your body to it, you also have to be able to bring those balls in no matter what. When the Falcons star receiver opens up his hands, they literally absorb the ball and there’s no way it bounces off of them. He might not make any Odell Beckham-type one-handed grabs, but only because he doesn’t have to. He always puts himself into position to catch the ball with both hands and secure the ball without a problem.

On that occasion versus the Giants the star wideout made a juggling catch I still don’t understand.

At 6’3’’, 220 pounds Julio presents one of the more chiseled physiques among all NFL players. Not only does he have an explosive lower body to burst out of his stance and take flight, he also has really strong hands, which he uses very well. With defenders lined up in press, they don’t stand a chance against Julio because he slaps those hands away and just gets into his routes. Often times you see defensive backs leaning into him and trying to hold him back, but completely lose him on in-breaking routes where he can even take outside-releases because of how bad the positioning of the opposing player is. And when the ball is up for grabs he does an excellent job boxing out and fighting through air traffic on his way to the pigskin.

Just look at that guy destroy the Packers’ Ladarius Gunter in the NFC Championship game and then bully his way all the way into the end-zone.

Often times the difference between a completion and an interception is the way the receiver works back to the throw. One of the many qualities Jones presents is the fact he doesn’t wait for the ball, but rather attacks it in the air. He shows laser focus when looking the ball into his hands and doesn’t lose track when it sails over his head. Many young receivers look up in the sky with their hands in front of their body and therefore drop passes. Julio excels at running under the throws and letting them drop into the bread-basket. Moreover, he brings in a lot of tipped throws and has extremely strong hands to hold on to the ball even when defenders are draped all over him. Along the sideline he has outstanding awareness of where his feet are, but even more so snags the ball on the way out of bounds.

Here’s his unbelievable Super Bowl catch that put the Falcons in position to kick the game-sealing field goal (which they couldn’t even attempt because of the yardage they lost the first three downs).

Another impressive number Jones put up in Indianapolis back in 2011 was the 4.39 in the 40 yard dash at the same weight he plays at now. To put that into perspective – the fastest receiver that year beat him by only two hundreds of a second even though that guy weighed in at only 192 pounds. That speed translates directly to the field for the Atlanta monster. As mentioned above, Ju started his career as more of a speedster, averaging 17.8 yards a catch his rookie year, which is on par with DeSean Jackson’s career average. While growing as a player, he was asked to attack defenses on all levels, which bumped that number a little bit. In 2015 he caught 136 balls, with many of them being quick screens and underneath routes, and his average went down to 13.8. Last year the Falcons spread the ball around more and even though Julio certainly still was the clear number one option in the passing game, as he ran by and through defenses on his way to more than 1400 yards on 17 yards a grab.

In this year’s monster 300-yard performance against Carolina, number 11 gets inside leverage and when he makes his break he grabs the ball and outruns the entire defense.

I love players who are confident in their ability and know when it’s their time to take over games. Basically I believe Julio wins every single snap he’s being covered one-on-one. Yet, other than many star wideouts he doesn’t demand the ball to be thrown his way. Jones has this thing about himself that he will fight his way to get open on every single snap, but still draws the attention of the defense and opens up even bigger opportunities for his teammates. The Falcons star receiver had less than 60 yards in just four games this season and his team won each of those contests. He just doesn’t expect Matt Ryan to force throws into double-coverage constantly, but when he is singled up he beats DBs to death.

With Jones’ combination of size, speed and leaping ability, I always expected him to turn into a great pro receiver, but what I didn’t know was his willingness to work and attention to detail would put him on pace of a Hall of Fame career. He has had a tremendous impact on the Falcons organization ever since they traded up to draft him. Julio has rewarded the organization by turning into the premiere wide receiver in football, who plays his best at the biggest stage and carries his team to new heights. Matt Ryan had a huge year and deservedly won the MVP because of that, but the attention his number one receiver gathers from opposing defenses was the reason their offense was able to put up historic numbers. Tampa Bay’s Gerald McCoy doesn’t think number 11 was born human and for good reason. Julio Jones is an absolute beast and the best receiver in today’s game.