With the Senior Bowl and all other games in the books scouts made their way to Indianapolis to see the athleticism of all the prospects. A couple of standouts left impressions on visitors while others failed to impress. Here are my top 10 players to improve their draft stock during the weekend plus a summary of the Combine (This isn’t any particular ranking):

Ali Marpet, C/G/T, Hobart: After showing he belonged at the Senior Bowl this Division III kid proved he can also match up with top prospects athletically as he ran the fastest 40 among all offensive linemen (4.98) and was second in both the 3 cone drill and 20 yard shuttle while looking fluid and quick in specific position drills. He played left tackle at Hobart, but will be a center or guard in the NFL. 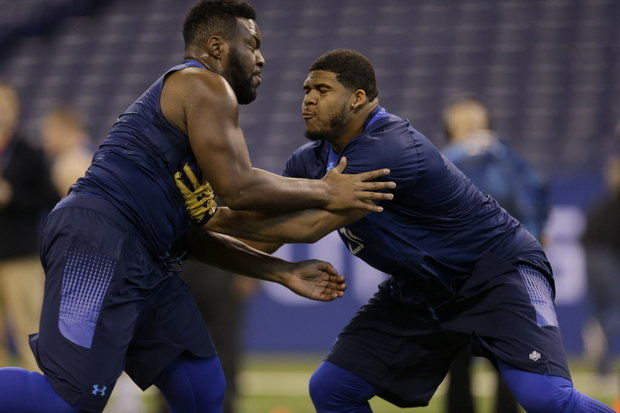 La’el Collins, G, LSU: He was a mauling left tackle in the run game in college, but scouts questioned his athleticism coming into the combine. After posting solid numbers in the 40 yard dash (5.12) and 10-yard split (1.81) in addition to doing great in the on-field drills he has solidified his spot in the first round. Whoever drafts him well get a complete Pro-Bowl guard, although he could probably play all five positions on the O-line.

Dorial Green-Beckham, WR, Oklahoma: At 6-5, 240 pounds this guy just looks like the prototype NFL wideout. For his size he ran a solid 40 (4.49) and showed everything you want to see out of a complete wide receiver – speed, quickness, body control, tracking the ball in the air and natural hands to bring it in. The off-the-field issues because of which he missed the entire 2014 season still have to be evaluated with him, but there’s no question he has all the physical tools to dominate.

Kevin White, WR, West Virginia: I loved the way Mike Mayock put it after White ran a 4.35 in the 40 – “He’s now officially a freak.” He’s not only big, fast and strong, he has also shown great hands and outstanding ball skills. A guy that has his kind of size-speed combination will certainly continue to create buzz and there will be a two-man race between White and Alabama’s Amari Cooper for the first receiver taken off the board.

Chris Conley, WR, Georgia: Coming out of Georgia’s run-heavy offense scouts questioned this guy’s speed to separate on routes. With the third-best number in the 40 yard dash (4.35) among wide receivers he raised some eye-browns. After Byron Jones jumped an unbelievable 12’3’’ in the broad jump many forgot Conley was third all-time with 11’7’’ just two days before that. Moreover he recorded the highest vertical (45’’) and caught the ball very well. 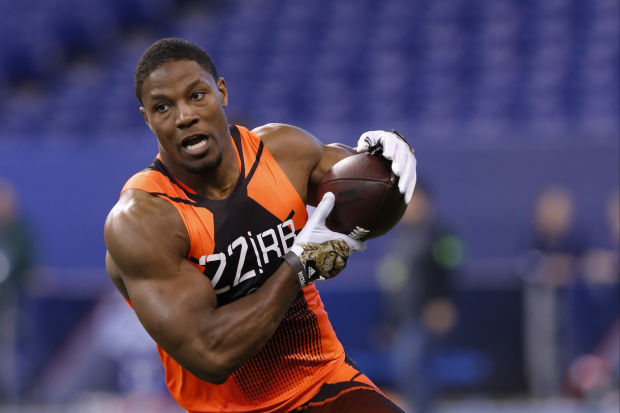 David Johnson, RB, Northern Iowa: Running a 4.5 is great for his size, but he was second among running backs in the three cone drill, the vertical and broad jump as well. This guy is the best pass catcher at his position in the draft and has shown he’s not just a big back with solid hands, he’s the complete package with better cutting ability than most guys thought and should hear his name called on the second day of the draft.

Vic Beasley, OLB/DE, Clemson: To me there’s no question who the biggest winner of the Combine is. Beasley would have improved his draft stock only by showing up heavier and proving he can carry this weight. Instead of just weighing in at 246 pounds (instead of the expected 230+) he dominated with the fastest 40 among defensive linemen and linebackers, the most bench press reps (35) and top five performances in every other drill. Furthermore he moved very well in the on-field drills and is an intriguing prospect who will be suited best as a 3-4 outside linebacker.

Eli Harold, OLB/DE, Virginia: This guy probably was one of the biggest under-the-radar players in the draft, but after proving what an explosive athlete he really is scouts will have to take another look at his tape. Harold did nothing at the Combine that wouldn’t let you think he won’t develop into a threat in the pass rush department.

Trae Waynes, CB, Michigan State: Going into last week most scouts had Waynes as their top corner on the draft board, but probably ranked him behind some other defensive prospects. After showing off his athleticism with the top 40-time among defensive backs at 4.31, fluidity and ball skills in position drills plus his resume as a physical man-to-man corner this MSU kid has earned himself a spot in the top 10.

Byron Jones, CB, UConn: He didn’t even run the 40 and still has every scout’s eyes on him after setting a new world in the broad jump at 12’3’’ which is 8 inches (!) further than any other prospect measured since this has become a Combine event. But don’t just get focused on his measurements (although he also he had the highest vertical among defensive backs and was number three in both the 3-cone and 20 yard shuttle drill) he looked great on the field as well. His pro day will certainly be well-visited.

The Combine was dominated by excellent showings of the offensive and defensive linemen, with Vic Beasley leading the way. Other than the guys mentioned above two Florida players had great performances – offensive tackle D.J. Humphries had a solid day and outside linebacker Dante Fowler clocked in a 4.6 at 261 pounds, moved very well and hit the bags with violence running the arc. Overall Jake Fisher looked like one of the best athletes on the field and by measurables. To me USC’s Leonard Williams is still the best player in this year’s draft. Kentucky’s “Bud” Dupree had all the measurables you want to see, but couldn’t participate in the on-field drills, which he will have to do at his pro-day to hear his name called on Day 1. UTC’s Davis Tull, who many scouts don’t think has the physical traits to win on the edge will have to show off his speed and burst in Chattanooga, but with the highest vertical and second-furthest broad jump his explosiveness certainly makes him interesting.

The tight-end and linebacker groups were disappointing in general. The tight-ends ran an average of 4.84 in the 40, with Florida State’s Nick O’Leary at 4.93. They didn’t impress me in position-drills either. Minnesota’s Maxx Williams still is the clear number one prospect at his position. The linebackers didn’t wow anybody either, with TCU’s Paul Dawson “highlighting” the group. Dawson failed to impress with a 4.93 40 and below-average numbers in the vertical and broad jumps. His play-making ability and ball-mageticism during his college days are unquestioned, but his mediocre numbers may hurt his draft stock. The only guy helped himself to me was Clemson’s Stephone Anthony, who did everything pretty well.

The top two quarterbacks Jameis Winston and Marcus Mariota did a solid job Friday as both threw the ball well and answered the questions at the press conferences intelligently. Mariota showed much better athleticism with the fastest 40 (4.52) and 3-cone drill among signal-callers (6.87) plus explosive numbers in the jumps. The conversation who the number three quarterback in the draft is will continue as both Baylor’s Bryce Petty and UCLA’s Brett Hundley made some great NFL-throws.

Other than the linemen the wide receivers were the top position group with the Combine’s fastest 40 by UAB’s J.J. Nelson (4.28) followed by Miami’s Phillip Dorsett (4.33). Coming into the weekend I ranked Kansas State’s Tyler Lockett and Duke’s Jamison Crowder pretty much the same, but Lockett separated himself with his with 40 (4.4 compared to 4.58). I thought the entire group did a solid job catching the ball and I could name numerous players who improved their draft stock, including Central Florida’s Rannell Hall and USC’s Nelson Agholor.

The fastest 40 among running backs was run by Michigan State’s Jeremy Langford who looked terrific on the field as well, which will make scouts reevaluate his top gear and open-field running. Georgia’s Todd Gurley seems to be on a great way to recover from his torn ACL, but with Melvin Gordon doing a good job in all drills he should be the first back off the board. Ameer Abdullah was number one in the vertical and broad jump, the 3-cone and 20 yard shuttle drill, but disappointed with a 4.6 40.

And finally, let’s take a look at the defensive backs. Besides Byron Jones crazy broad jump Ohio State’s Doran Grant had a great day. He clocked in at 4.44, moved fluidly and played the ball in the air very well. Florida State saw Ronald Darby’s draft stock rise while P.J. Williams had a disappointing workout. Washington’s Marcus Peters didn’t help himself and off-the-field issues still have to be evaluated with him, but he could turn out as a steal if he slides to the middle of the second round. Alabama’s Landon Collins didn’t put up any outstanding numbers, but ran a solid 40 for his size (4.53) and remains the clear-cut number one safety in this year’s draft.

3 thoughts on “Who helped himself the most at the NFL Scouting Combine:”