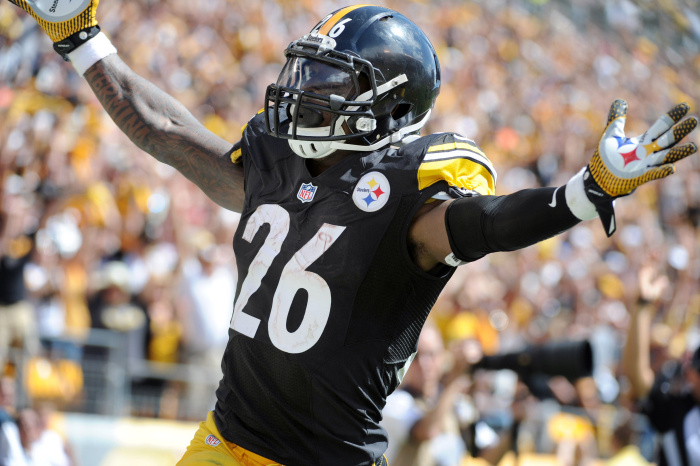 Le’Veon Bell racked up 2215 yards from scrimmage this year which ranks him second among all players only behind DeMarco Murray from the Cowboys. He also was a big reason the Steelers won their division this year for the first time since 2010. To me he is the best overall-running back in the league at this point. The following should tell you why he’s so good.

Bell is one of the NFL’s unsung freakish athletes. His ability to hurdle defenders trying to catch him by his legs has been very impressive going back to his Michigan State days. Coming into the league people doubted his breakaway speed, but he has worked on that part of his game and now seems to have the ability to run by pretty much everybody. He has extremely nimble feet for his size and just looks like he can do everything with ease.

It’s just fun to watch him leapfrog opponents trying to get him low.

A lot of big backs in the league don’t have the ability to leave defenders standing. Bell is special at setting up defenders and then making a cut to leave them behind. But he’s not just limited to making those cuts in the open field, he can cut back runs and punish bad backside containment. In addition to that he has a great spin move as he’s attacks one shoulder of the opponent and then finds a way to get by him on the opposite side. Moreover he uses his moves to get separation on linebackers and safeties trying to cover him out of the backfield.

Just watch him pick up this first down on his own as he spins away from Brian Cushing.

This is the area Bell improved the most on since he’s gotten to the pros. At MSU he was a great East-and-West runner who could also get it done between the tackles. But after joining the Steelers two years ago he quickly learned that NFL players are simply too fast to be outrun in the open field and that he has to get it done inside. He can be patient when he needs to but doesn’t shy away from hitting the hole at full speed either, while also having the natural instincts to see running lanes develop in the open field and trusting them to make big plays.

Bell started the season with a stellar performance against the Browns, including this unbelievable run.

After talking about Le’Veon as one of the best athletes and open-field runners I want to talk about how strong and powerful this dude really is. Most people only talk about guys Marshawn Lynch as power-runners, but Bell is certainly in the top five in this category. He can drop the shoulder on defenders and punish them for being in his way and has one of the strongest bases of all the backs in the league. For a guy his size defenders rarely get a clear shot at him and really knock him backwards. He can absorb big hits and still stay on his feet. Furthermore he has the strength to drag several opponents on his back and can push the pile to gain extra yards.

Right here he simply imposes his will on the Titans defense.

From the aforementioned 2215 total yards from scrimmage, 854 came via the pass (most among running backs). His 83 receptions rank him second at his position only behind the Bears’ Matt Forte. Bell is an improved pass protector, but he’s just too valuable as a receiver to leave him in the backfield all the time on pass plays. He runs great routes, is a mismatch on linebackers and the Steelers use him a lot on screen plays where he can follow his blockers and make people miss in the open field.

In week 14 against the Bengals he did a little shake-and-bake and just made Emmanuel Lamur look silly.

Bell is the kind of runner you can give the ball 30-40 times a game. He doesn’t mind being the workhorse in the Steelers offense and doesn’t get tired all game long. Whether it being punching the ball in from the one yard line or taking a quick screen to the house – he gives a 100 percent on any given play. He started all 16 regular with 373 touches and only missed the Steelers wildcard game, which was a big reason they lost that game.

All the factors mentioned above weigh in on this. You can line Bell up in the backfield, in the slot, on the outside to get him on mismatches in goalline situations and he can produce everywhere. He is a true dual-threat who can get you the tough yards when you need them but who can also take it the distance at any point of the game. He doesn’t have to leave the field at any situation. Just give him the ball!

Combining all the factors mentioned above you pretty much have a perfect running back for today’s game. Since coming into the league he has worked on all the things NFL experts criticized him for. He has become an excellent downhill runner with great production as a receiver and all-around player who doesn’t fumble (none in 2014). He has stayed the big bruising back he was in college but with a lot more finesse.

I like players like DeMarco Murray and Marshawn Lynch. They are certainly up there, but to me Bell is the complete package and the best back in today’s game. He has also proven he can put his team on his back (just like he did in a comeback win against the Titans in week 11).

He is only entering his third season as a pro. So his possibilities are nearly unlimited.