Sunday’s Super Bowl matchup between the Patriots and Seahawks features a lot of different storylines and two great teams. Here’s what I think both teams need to do earn another ring and how I think the game will end:

How the Patriots will win:

First of all they have to stop the Beast – no question about that. That’s why the play of Vince Wilfork will be so important taking on blockers and freeing up his linebackers to gang-tackle Lynch. Next they have to keep Russell Wilson in the pocket and keep him from taking off and picking up big yards. I think they will use Jamie Collins as a spy on Wilson and with his ability I think he’ll do a good job at that. I believe they have the ability to match up with the receivers on the outside with Darrelle Revis and Brandon Browner.

On offense Gronk has to take advantage of the guy matched up on him. If he has a DB on him he needs to be physical. Seattle is known for their tough defense, but they are not as big as most people think. In my opinion too many teams got away from pounding the ball between the tackles and let the Hawks defenders play to their strength which is using their speed to prevent runners from getting outside and defending the pass. I think the Patriots have to use their offensive line and LeGarrette Blount to keep the Seahawks in their base defense and not letting them use their Nascar packages (which means bringing in their best pass rushers and sliding Michael Bennett inside where he can wreak havoc). A way to make life on the Legion of Boom tougher is to stack the receivers up and use bunch formations, which the Chargers did earlier this year. And finally Tom Brady has to take the throws that are there. Seattle plays a lot of cover 3 with Earl Thomas in the middle of the field and the linebackers doing a good job taking away the underneath throws. The holes are on the outside behind the linebackers. So basic hitch and curl routes won’t do it, but the Patriots could find success on deep comeback routes. A matchup to keep an eye on will be Brandon LaFell against a banged up Richard Sherman. If Sherman isn’t a hundred percent LaFell has a good chance to beat him on jump balls.

How the Seahawks will win:

I’ll start this the same way as the paragraph above – feed the Beast. Marshawn has a way of taking over big games. There is no way the Seahawks stay in the NFC Championship Game two weeks ago without Lynch. They must get him going and tire the Patriots defense out. That opens up everything else for their offense – the read-option, the play-action pass, rollouts and so on. This team goes as far as their most valuable player goes. Next I think the receivers must step up for them. They cannot allow the Patriots DBs to lock them down in man-to-man coverage. Lynch has proven to be able to succeed against eight guys in the box, but it also makes it harder for Wilson not only to complete passes to his guys in man coverage and most of all just gives defensive coordinator Matt Patricia the ability to do a lot of different things in coverage and personnel-wise. Russell Wilson obviously can’t turn the ball over and give Brady and his offense a short field to work with. He has to take the easy throws off of play-action but not get too conservative to keep the defense guessing.

On defense the Hawks already have the recipe to win – they have a great secondary that can lock down the receivers, the speed and tackling ability to take away yards after the catch and great pass rush to make Brady uncomfortable in the pocket. Now it comes down to execution. Michael Bennett will be a very important piece for the Seahawks to repeat as Super Bowl champions. The offensive tackles of the Patriots make one of the best duos in the league, but in pass situations he is often lined up on guards. Justin Tuck did exactly that against the Patriots in their previous two Super Bowls against the Giants and got a lot of pressure on Brady. Bennett has to have similar success doing so. And then they have to find a way to stop Gronk. To me the best way to doing that is to put a guy in his face and disrupt him. Whether that being K.J. Wright, Kam Chancellor or maybe even Byron Maxwell, the Seahawks have to keep him from running free and if he does catch it they have to help their teammate to get the tight end on the ground. 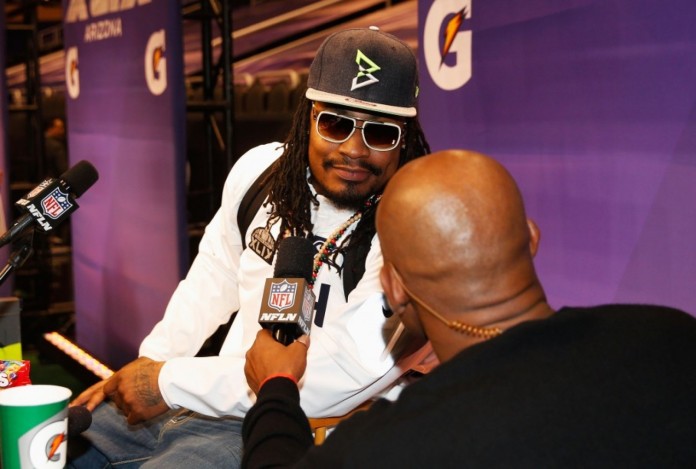 These two teams are both very good and I can’t see how this game could be a blowout like last year’s matchup. I think both team’s will try to run the ball and their quarterbacks won’t have big games, although this game might come down to which one of them takes better care of the football. Gronk will catch a touchdown on the goal line against a defensive back, Marshawn Lynch will keep the Seahawks offense going as will LeGarrette Blount and Jamie Collins will keep Wilson from making plays with his feet plus picking him off once. In the end this will be a defense-oriented game and the final score will be:

What makes the Seahawks so great is the fact that they will stay with their game and not let anybody make them change the way they play. On the other hand what makes the Patriots so great is their ability to adapt to what their opponents do and find a way to take away their strengths. In the end I don’t think the Seahawks will be able to win the game that way and the brilliant scheming of Bill Belichick and his coaches will be the difference. New England won their first three Super Bowls with a good and steady defense and that will be the same this year.

I expect nothing less than a terrific game like boxers going back and forth dealing blows. Have a great Super Bowl Sunday everybody!