With the Giants and Bills kicking off the season Sunday and many other teams doing so today, I decided to list the preseason games I think will be most interesting. It’s based on what teams will display in terms of new players and coaches, reordered depth charts and roster depths. I did a one to three ranking for each week. Let’s get into it:

Starters won’t play more than a couple of drives, but still you’ll get a glimpse at them and most of all see new young players step onto an NFL field for their first time. 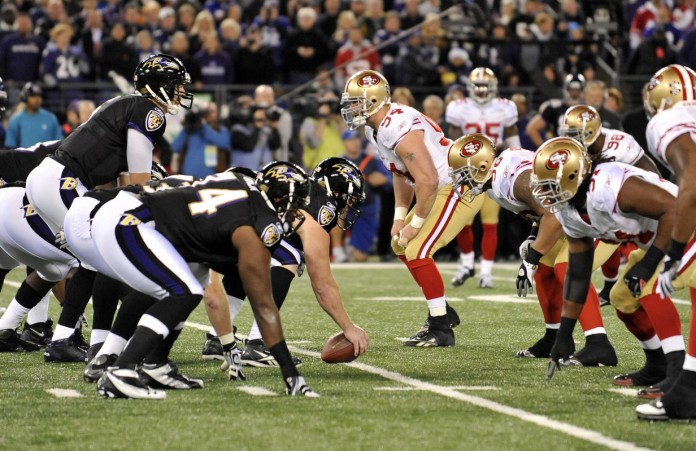 1. San Francisco 49ers @ Baltimore Ravens: In a rematch of Super Bowl XLVII both teams will most of all show how deep their rosters are. In addition to that it will be interesting to get a look at the reshuffled Ravens offensive line plus new offensive coordinator Gary Kubiak and chain moving tough guy Steve Smith, while Colin Kaepernick has a couple of new weapons to work with, including Brandon Lloyd, Stevie Johnson and draft steal Bruce Ellington out of South Carolina. Another thing to watch will be the inside linebackers and safeties for both teams that will feature new guys in starting rolls – first round pick C.J. Mosley out of Alabama plus third rounder Terrence Brooks out of Florida State with the Ravens and Michael Wilhoite plus former Colt Antoine Bethea for the Niners.

2. New Orleans Saints @ Saint Louis Rams: The Rams won the last two regular season meetings between these teams by being able to get to the quarterback and running the ball effectively. We will not only get a glimpse at how their respective first units will do, but the game is very interesting because of numerous other reasons. One of them being the new-formed and highly praised Saints safety tandem of former Bill Jairus Byrd and second year Kenny Vaccar0. New speedster Brandin Cooks out of Oregon State will also be fun to watch. Another interesting thing to look at will be the battle for the Saints number one running back spot. As for the Rams it’s time for Sam Bradford to finally play at the level he was expected to and connect with a couple of weapons he has in the passing game, including newly signed Kenny Britt, Chris Givens and second year playmaker Tavon Austin. If that wasn’t enough you will get to see an underrated Rams defensive front seven, which should be one of the best this year.

3. Houston Texans @ Arizona Cardinals: The main reason the Texans will be interesting to watch is because of top players Brian Cushing and Arian Foster coming back from injury in combination with Ryan Fitzpatrick having to defend his spot as the starting quarterback against a couple of young signal callers behind him. With Antonio Cromartie joining the Cardinals and Tyrann Mathieu coming back that secondary should challenge the Seahawks’ Legion of Boom for the top ranking among defensive backfields. You also get a chance to finally see first overall pick Jadeveon Clowney on the field at the same time as J.J. Watt. In addition to that I’m really looking forward to see Andre Ellington’s development from last year.

Update: Foster will sit out against the Cardinals.
Week 2:

Starters will see more time in week two. Still, don’t expect to see them for much more than a quarter.

1. Cleveland Browns @ Washington Redskins: This game will tell a lot about those two teams, but the thing I’m most interested in is Pierre Garcon and DeSean Jackson going up against Joe Haden and 8th overall pick Justin Gilbert. What Redskins fans probably want to see most is a healthy Robert Griffin III in the new offensive scheme of Jay Gruden while Browns fans and many others want to see how Johnny Football looks in an NFL game. Some other things to keep an eye on are the new Browns backfield, with former Texan Ben Tate and Towson star Terrance West fighting for carries, and the right guard and tackle spots on the Redskins offensive line, which are still up for grabs.

2. Denver Broncos @ San Francisco 49ers: With two teams that are favorites in their respective conferences and that could meet again in the big game, this one has to be ranked high. Watching one of the best offenses of the Broncos going up against one of the best defenses of the 49ers should be fun, but the other sides of each team will be even more interesting, as the Bronco defense will feature free agent signees DeMarcus Ware, T.J. Ward and Aquib Talib while the Niners offense has a couple of new offensive weapons as well.

3. Kansas City Chiefs @ Carolina Panthers: Two teams that fought their way back into the playoffs last year will try to repeat doing so this season. It will be interesting to see what a weak Panthers passing game can do against a very good passing defense of the Chiefs without the services of Steve Smith – Kelvin Benjamin has to be great right away. You should keep an eye on the Panthers offensive line, that could see some changes until the season starts, especially with Jordan Gross leaving a big hole at left tackle, and their new shuffled defensive backfield. On the other hand the Chiefs have some interesting rookies to took a look at – Rice cornerback Philip Gaines who could soon be in a starting role with Brandon Flowers leaving town, Oregon running back De’Anthony Thomas maybe as a Dexter McCluster replacement and Georgia quarterback Aaron Murray who could be their future at quarterback.

This week will tell you the most about starting units and rotations. Starters will be on the field for up to three quarters and you get the feeling of a real NFL game.

1. Cincinnati Bengals @ Arizona Cardinals: These are two teams many people are very high on, especially because they have so much young talent. While the Bengals are trying to defend their AFC North crown, the Cardinals are looking to finally get back to the playoffs. Interesting aspects in this game will be Andy Dalton having to face one of the NFL’s top defenses plus the Bengals running back situation and how the carries will be split between rookie sensation Giovani Bernard, old but steady BenJarvus Green-Ellis and former LSU tiger Jeremy Hill. On the other side the Cardinals will also have a pretty tough job going up against a stout Bengal D. My personal favorite in this game will be battle between Cincy’s A.J. Green and Arizona’s Patrick Peterson.

2. Tamba Bay Buccaneers @ Buffalo Bills: This game features two teams that try to go from worst to first. Both teams go into the season with a lot of optimism. While the Buccaneers bring in a couple of free agents including former Bears’ backup QB Josh McCown, Bengals’ defensive end Michael Johnson and Titans’ pro bowl cornerback Alterraun Verner, the Bills look for Clemson superstar wideout Sammy Watkins to be a big difference maker quickly. Both teams bring back very important players in running back Doug Martin for the Bucs and quarterback E.J. Manuel for the Bills. Let’s see how good those two teams really are.

Side note: The Bills should still have a bad taste in their mouths after losing to the Bucs 27-6 last year.

3. Oakland Raiders @ Green Bay Packers: If you’ve followed free agency this year you saw the Raiders picking up about half the players out there. They signed new players at so many levels – cornerbacks Carlos Rogers and Tarrell Brown, running back Maurice Jones-Drew, defensive linemen Justin Tuck and Antonio Smith, wide receiver James Jones, and a couple of other guys, while letting their arguably best two players in offensive tackle Jared Veldheer and defensive end LaMarr Houston go. Many people think that they could make noise with all the new players on the roster, but I’m not really buying into it. They will get a chance to prove me wrong against the Packers. Speaking of the Pack, they bring back a couple of players who missed time to injury last year. That includes linebacker Clay Matthews, receiver Randall Cobb and most of all signal caller Aaron Rodgers. Let’s see if he’s really back to a hundred percent.

As this week won’t feature a lot of starters, the games are more about the depth of rosters and many players fighting for a roster spot. Even though these games might not have the highest quality of play, they are still worth watching, because you see players really giving all they’ve got to prove themselves to the coaches.

Some interesting late round draft picks and undrafted players from this year to watch:

Lache Seastrunk, RB, Washington Redskins (Baylor) – A Baylor player standing right next to RG3 who could deliver some big plays, altough he has to learn that he can’t always go for it all.

Kelcy Quarles, DT, New York Giants (South Carolina) – He has to work on his hand usage, but has the potential to be a starter soon.

Seantrel Henderson, OT, Buffalo Bills (Miami) – He was highly recruited going into college and looked great against the Giants. He could end up starting if Cyrus Kouandijo’s knee isn’t at a hundred percent.

Alfred Blue, RB, Houston Texans (LSU) – He might not have the production at the college level, but could still be the the number two back in Houston soon. He has all the tools, but has to prove he can stay healthy.

Demetri Goodson, CB, Green Bay Packers (Baylor) – He’s the only player in NCAA history (!) to start both an NCAA Tournament game (Gonzaga point guard) and a BCS Bowl game. He’s raw, but has a lot of potential and could contribute on special teams until he’s ready.

Shayne Skov, LB, San Francisco 49ers (Stanford) – Finishing fifth in the Dick Butkus award for the nation’s best college linebacker, he had an argument to be the top run stopper overall this year. He has to improve his pass coverage skills, but with NaVorro Bowman probably sitting out half the season, he could see some time at linebacker, as well as on special teams.

A.J. McCarron, QB, Cincinnati Bengals (Alabama) – He was 34-2 as a starter and won two national championships at Bama. Do I have to say anything else?

Storm Johnson, RB, Jacksonville Jaguars (UCF) – He will have to work on ball security and pass protection, but is a big, strong downfield runner that can make it happen in the open field. He has a chance for the number two spot on the depth chart behind Toby Gerhart if he works on the two aforementioned things.

Connor Shaw, QB, Cleveland Browns (South Carolina) – Probably the most underrated player in the draft didn’t hear his name called at New York City Music Hall. If you look at what he’s done in college, you have to think that coaches will sooner or later understand what a special player he is. (Altough it will be hard for him to shine with all eyes on Johnny Football.)

Max Bullough, LB, Houston Texans (Michigan State) – He’s another often overlooked player, who really played big for the Spartans over the course of his college career. He might not be the greatest athlete, but has great instincts, is tough and plays with a lot of heart. Coaches will love him.

Vinnie Sunseri, S, New Orleans Saints (Alabama) – He was one of my favorite players during his time at Bama, but a mid-season knee injury kept him from playing the rest of the season and convince scouts. He’s very intelligent, a good tackler and has an unbelievable work ethic. He should contribute on special teams and part-time on defense as soon as he’s fully healthy.