Because NFL.com unveils their final 10 players on the NFL Top 100 list, as voted by their peers, tonight at 10 PM E.T., I decided to create my own list of who I think are the top 10 players in this league.

First – These are the top 100 players of 2014. I’m projecting who I think will be the best this year. That’s why you won’t see any players that will miss the season because of injury or suspension, but could include players that missed part of the 2013 season.

Second – I know this is a quarterback-driven league and you’d never take a premier guard over a great signal caller. However, there are enough good quarterbacks in this league to choose from, so that you can take a player that might be more dominant at his respective position. That’s why this isn’t just a list of the top 10 quarterbacks. 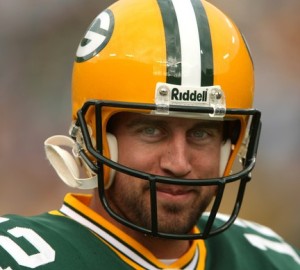 Rodgers – The regular season passer rating leader of all time missed a big part of the 2013 season due to shoulder injury. He started the Packers first seven games, winning five of the them, while throwing 15 touchdowns to only 4 interceptions. After he missed the next eight games, he came back week 17 to lead his team to a comeback win against their NFC Nort rival Bears and clinch a playoff berth. The only logical reason to his ranking at number 11 to me is the fact that he missed half the season. But as I already said this is a list of the top players of 2014 and I expect him to play lights out, as well as keeping his Packers in the hunt for the Lombardi trophy, as he does every year. 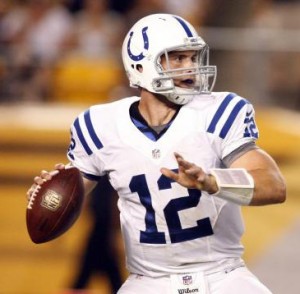 Luck – What he has done in his first two seasons is unlike anything else. In 35 games he has completed 11 game winning drives and eight fourth quarter comebacks, while going 22-10 and leading his team to the playoffs twice, including an epic 28 point comback win against the Chiefs in the Wild Card round this year. To me there is no explaination why he dropped from number 23 to 30. You only have to look at the stats – he improved his completion percentage from 54.1 to 60.2%, while cutting down to half the number of interceptions (9) and repeated to throw for 23 TDs. He beat last years top 3 teams – the Seahawks, 49ers and Broncos – during the regular season. He is the Colts deciding factor and will take another step this year, as he proves why he is number two on my list and already an elite signal caller.

Watt – The most disruptive defensive player in the league right now. His 2012 campaign was unreal. His 2013 season might not be as impressive statistically, but Watt continued to impact every play and game, he was in. His stats went down a little due to constant double teaming and slide protections going his way. With everything offense tried to stop him, they had to face it – you can’t stop the guy. He will make plays no matter what. And he impacts every play, because if you commit two guys to him another defender is unblocked. He’s a great pass rusher and run stuffer – just a complete defensive end and by far the best at his position. What he has done in his short time in the league makes you think he has a chance to go down as one of the greatest defenders of all time.

Johnson – Three years in a row now Megatron has been the NFL’s best wide receiver. He is a matchup nightmare for every cornerback in the league. You pretty much can’t cover him one-on-one and even if you put safety over the top, he continues to make plays just because of his incredible skill set. Just watch this play. He is as consistent as any player in the game right now and would function in every offense. 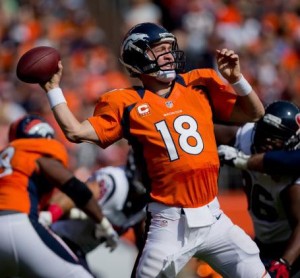 Manning – The only five time NFL MVP put up the best regular season of any quarterback in NFL history, as he throw for a record breaking 55 touchdowns and just 10 picks. He made it all the way to the Super Bowl, in which he played what was probably his worst game ever and lost the Seahawks. But that’s not the reason I only have him at number 5, but rather his surrounding crew. His offensive line only gave up 18 sacks all season long and his receiving corp was the best in the game. I don’t want to take anything from Peyton, but I just don’t think he could play at the same level if he was pressured more or guys like Demaryius Thomas didn’t take a quick screen to the house every two weeks.

Brady – What he has done with the receivers he had this year was very impressive. He had no number 1 or maybe even 2 receiver on the roster, yet took the Patriots to the AFC Championship game once again. The only problem I have with him all the time (and the reason I only have him at number six) is that his level of play doesn’t come close to his usual game when he has pressure in his face. He has enjoyed great offensive line play every year he has been in the league. I just don’t see him playing even close to his normal level when being protected by offensive linemen Rodgers had in his career. 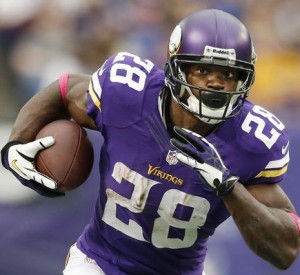 Peterson – The best pure runner in the game and an absolute monster trying to bring down. In 2012 he literally ran his team into the playoffs. I don’t think there is a running back in this league that can’t put up the numbers and play at the level he has with that little of a passing game to back him up. Just imagine if his team did have a true passing game and he wouldn’t face eight man in the box all the time – scary.

Brees – He is certainly in the mix for the most important players to their respective teams and consistently takes the Saints to the playoffs almost every year. Many say his stats and overall game is boosted by the presence of Jimmy Graham and that might be true, as he clearly was the best receiving tight end in league in 2013 (and came close to my top 10). But even without him, he plays at an elite level and carves up defenses on a weekly basis. He has a chance to be the MVP pretty much every year and will have this year as well.

Willis – The 49ers emotional leader and quarterback on defense might have been beat out by his teammate NaVorro Bowman in 2013, but still is the gold standard for linebackers in the NFL. He is fast, strong, a wicked tackler, can blitz, cover and read plays as well as any defensive player in the game. If you want to start a defense around one guy, there is a good argument for him being that guy.

Thomas – Richard Sherman might the Legion of Boom’s vocal leader, but the key to the Seahawks defense sucess is Thomas. He gives them the freedom of playing man coverage all the time because he covers everything deep thrown anywhere near his way. But his skill set includes far more than just great range in the passing game – he can come up in the box and support the run and has really improved his tackling. He is by far the league’s top safety.

NaVorro Bowman would have made my top 10 if he wouldn’t have suffered a torn ACL in the NFC Championship game.